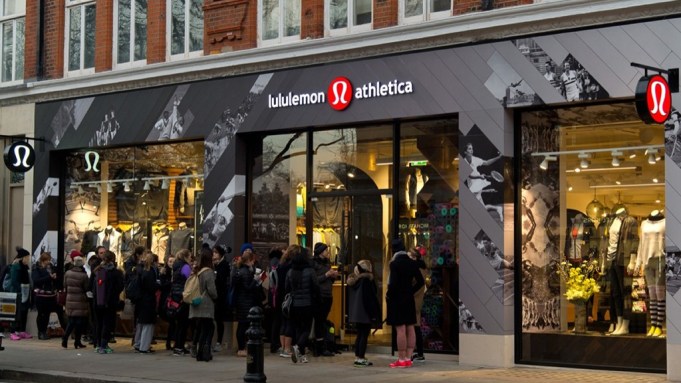 VILLAGE PEOPLE: Lululemon Athletica, which opened a flagship in London’s Covent Garden last year, is flexing its muscles in the UK, with plans to cut the ribbon on a further six units in 2015. The first one, at 38-42 King’s Road, not far from Sloane Square, opened today — with a morning yoga class and breakfast buffet — and there are stores planned for Marylebone High Street and Richmond upon Thames, also in London. Three more locations around the UK will be announced in the next month.

The King’s Road unit is on the former site of the King’s Road Sporting Club, an historic sports retailer that used to stock Lululemon gear. The 2,800 square feet store has dashes of neighborhood flavor in the form of blooms from The Chelsea Gardener on nearby Sydney Street, and props such as old wooden tennis rackets and barbells from vintage markets. Photographs in the window are a mix of 1920s and 1930s sporting events that took place in and around Chelsea, and images of Lululemon’s original Vancouver store.

As with the Covent Garden unit, staff at the King’s Road store are working hard to connect with the locals: There will be a yoga class before the store opens every Sunday morning and running club on Saturdays. On the wall, there are also pictures of the store’s ambassadors — athletes and yoga instructors — who are from Chelsea and its environs. The new store has a separate men’s wear area with a red Chesterfield sofa and a sign that says “Stretch Your Head,” and a women’s wear area that is divided into different merchandise “stories” such as hot yoga and running.

“Having been part of the Chelsea community for the last seven years, the King’s Road was a natural fit for our second store,” said Kristy Maynes, vice president, Europe, referring to the former Lululemon showroom on the King’s Road, which offered yoga classes and sold product. “Inspired by our ambassadors and the history of Chelsea, the store design elements were curated with a tribute to the local community. The community has been incredibly supportive of our brand, and we look forward to providing highly technical product and a great guest experience in our new space.”