Designers turned up for “So Chic, So Stylish” event. 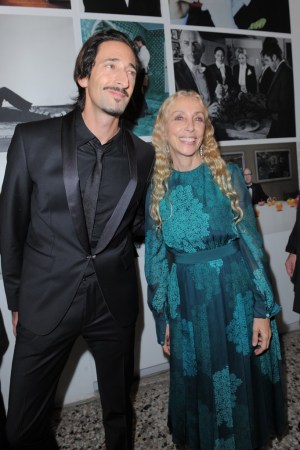 ON THE MOVE: Guests at L’Uomo Vogue and Citroën’s “So Chic, So Stylish” cocktail party Monday night gathered inside Milan’s Galleria Christian Stein and adjacent Studio Giangaleazzo Visconti for Champagne and the chance to bid in the silent auction benefiting Women Create Life, an organization that uses art and design to generate resources for women’s and children’s health worldwide. The prize, a shiny Citroën DS3 Cabrio with L’Uomo Vogue in gray lettering near the back window, was parked between galleries, where large-scale L’Uomo Vogue photographs lined the walls.

While gearing up for the upcoming women’s shows, Ashkenazi said she fell sick with a flu, and, to help her feel better, one designer from her team took her to church, while another gave her a gold necklace with a cornicello, or horn amulet, for luck. “It’s endearing — I nearly cried,” she said, touching the pendant at her neck and reaching to pull designer Diego Dolcini in for a hug.

Some guests offered their take on the prospects for 2013 amid Italy’s political confusion and lingering economic malaise.

“I’ve seen very beautiful products of high quality this week,” said Tod’s chief Diego Della Valle. “Kudos to all the Italian entrepreneurs who are doing a good job fending for themselves.” His brother Andrea chimed in, saying: “There are some positive signs this year. Italy is starting to come out of its troubles.”

Diesel chief Renzo Rosso was more lukewarm in his assessment. “In Italy, we need another few years to get back on our feet,” he said. “There’s still no spending power here.”