The women's label will be in-store starting this weekend for three months at the retailer, which reopened on June 16.

Anemone will be available at Fred Segal on Sunset Boulevard starting this weekend for three months.

For digital-first brands like Anemone, the Los Angeles-based women’s luxury swimwear and resortwear label, opening a pop-up experience is the chance to showcase and offer consumers its DNA in a new, tangible way — despite the pandemic.

“With where brick and mortar is at, there aren’t many opportunities to have your own point of view in a space,” said cofounder Joshua Shaub. “A lot of times, especially now, a brand’s vision gets lost in translation. Everything is so product focused now. This feels special.”

For the first time, Shaub and co-creator Lauren Arapage will feature Anemone — sold online at Moda Operandi, Net-a-Porter and Goop — in a physical location. Starting this weekend for three months, the brand will be found at Fred Segal, whose team approached the pair over a month ago, before L.A. County’s recent, record-hitting coronavirus death tolls.

“At that time, L.A. was just starting to reopen,” continued Shaub. “Because California had such positive results at the beginning [of lockdown]…it seemed we were in a good place to reopen. Fast forward to right now, things are strange again.”

“We didn’t know that cases would be spiking,” chimed in Arapage. “With that said, Fred Segal has done a really good job.”

While business has been operating with curbside pickup since May 8, the 13,000-square-foot Fred Segal officially opened at 30 percent client capacity on June 16. Inside, it’s mandatory to wear masks (with disposable options and hand sanitizers offered at the entrance), and there are contactless payments, six-foot spacing markers, as well as the option of concierge services. Located at 8500 Sunset Blvd., it’s open from Tuesday through Saturday, 11 a.m. to 5 p.m.

“It’s an iconic L.A. store,” said Arapage. “As an L.A.-based brand, we thought it was the perfect opportunity to highlight our vision…Summer 2020 is basically the summer of the at-home swimming pool. The window evokes positive feelings that hopefully people will feel as they drive by on Sunset.”

Their window display — an image of a pool and diving board from an aerial view — is inspired by David Hockney’s L.A. swimming pool paintings, an idea created in collaboration with David Browne of Studio Brown.

“It’s the physical embodiment of the collection,” said Shaub.

The summer 2020 line, available at Fred Segal, is inspired by the “ease” of Southern California’s surf and skate culture combined with the esthetic of the South of France in the Seventies. Showcasing “a bold color palette but earth tones,” ready-to-wear features men’s wear-influenced tailoring with items that include the Hutton shirt and Keaton trousers, named after Lauren Hutton and Diane Keaton, while swimwear pays homage to Jane Birkin. “The Swimming Pool,” Jacques Deray’s 1960 French film starring Romy Schneider and Alain Delon, is also a reference.

The designers, who met in New York and both have roots in California, share similar taste, they said. It’s what encouraged them to team up to start the brand, which during its inception in 2018, and still today, is continuously inspired by Kate Moss and the minimalism of the Nineties. First based in Venice and now in Santa Monica, Calif., their very first swimsuit was a recreation of a strappy, yellow Calvin Klein dress the supermodel was photographed wearing during that era. 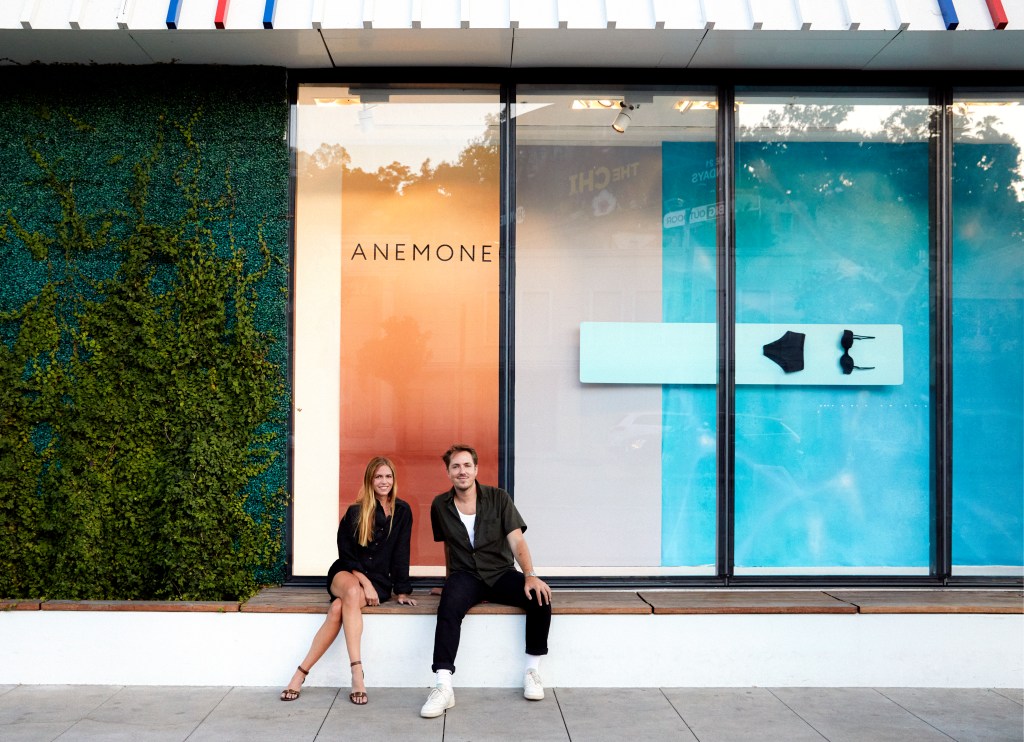 The cost of their creations is on the higher end, ranging between roughly $135 to $500, though the price tags haven’t slowed down business during COVID-19. In fact, between April through June, the brand has been up 280 percent, year-over-year, shared Shaub.

“Everyone has been emotionally and physically affected by COVID, but we have found that where we sit in the market, a lot of these women have second homes…pools,” said Shaub. However he noted that they’re taking it “with a grain of salt,” adding, “We are such a new brand, and it’s our first resortwear, it would have spiked naturally. Just as a new brand, you have that planned growth.”

Still, their online sales are “flourishing,” said Arapage, both on their site at anemoneswim.com and in retailers, particularly at Moda Operandi. “Our business is on fire with them. It’s crazy to see the results we’re seeing.”

While they’re busier than ever, they’re currently a team of just three. “It’s that double-edged sword,” Shaub said of demand. “We keep popping into the office just to get through orders.” 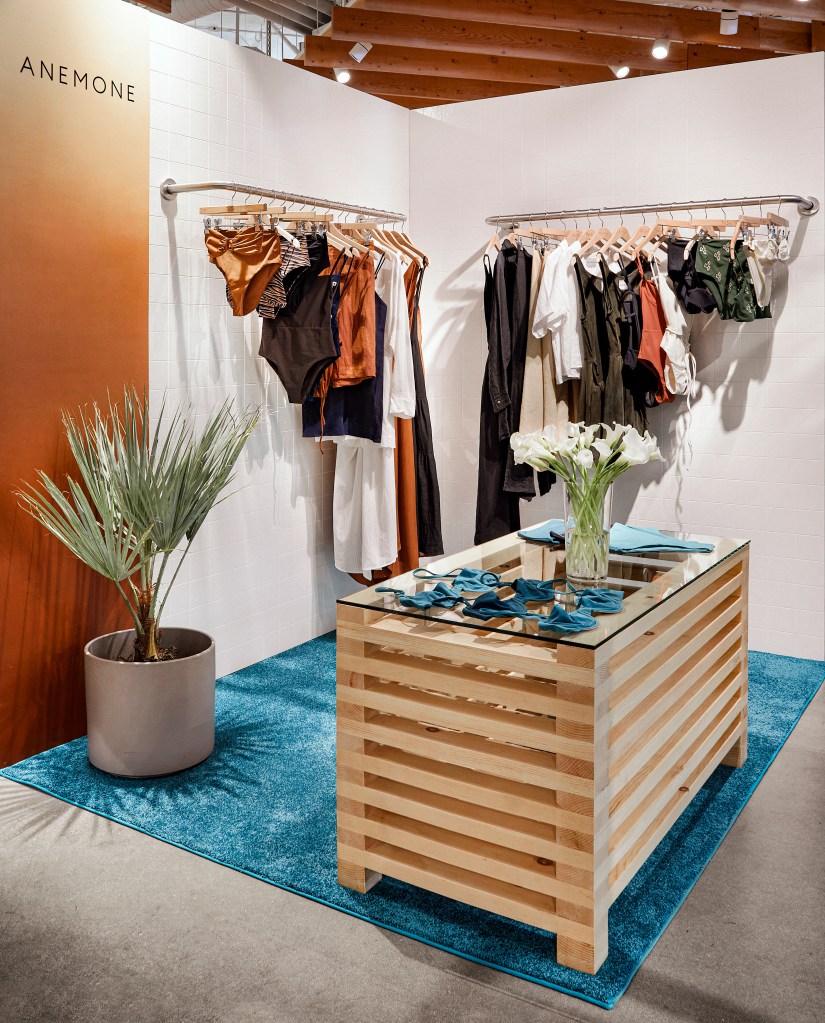 The summer 2020 line is inspired by the South of France in the Seventies and Southern California’s surf and skate culture.  Courtesy/Erik Melvin

The production side of the operation has its own challenges, he said: “We definitely saw some delays with production. More specifically, importing fabrics was challenging due to flight cancellations. It became more difficult and expensive to get things in a timely manner. Things that would normally take a few days took three weeks to receive. We also had to work super closely with our factories to manage the production, but we were lucky to have been able to get things done within our shipping window and in time for summer.”

For resort 2021, they began designing together, before collaborating remotely, added Arapage.

They both attribute success to their commitment to sustainability. All materials — fabrics (which offer UPF 50 protection) and buttons — are eco-friendly. And orders are shipped in compostable packaging, while suppliers are certified by Oeko-Tex, which create labels with safety, the environment and social responsibility in mind. For swimwear, “high-quality fabric” is imported from Italy and Brazil, while resortwear comes from Turkey, Italy and Japan. However, all production is created locally at family-owned factories in L.A. And when it comes to branding, they work with the L.A. Green Business Program, which prints recyclable foil on biodegradable card stock made from sugar cane.

“The oceans are being filled with trash, so it only makes sense for us to bring awareness of the situation to our clients,” said Arapage. “It’s important to be mindful of the Earth.”

While they’ve worked in fashion in the past, Shaub as a former buying director at Moda Operandi and Arapage as a press officer at Stella McCartney, getting an understanding of production was an education, though sustainability was always in mind. Instead of using silk, for example, they use cupro, known as the vegan alternative.

“As we got into and learned about production, the sustainable way of doing things is not that much harder or that much more expensive,” Shaub continued. “We thought, ‘Why isn’t everyone doing it this way?’” 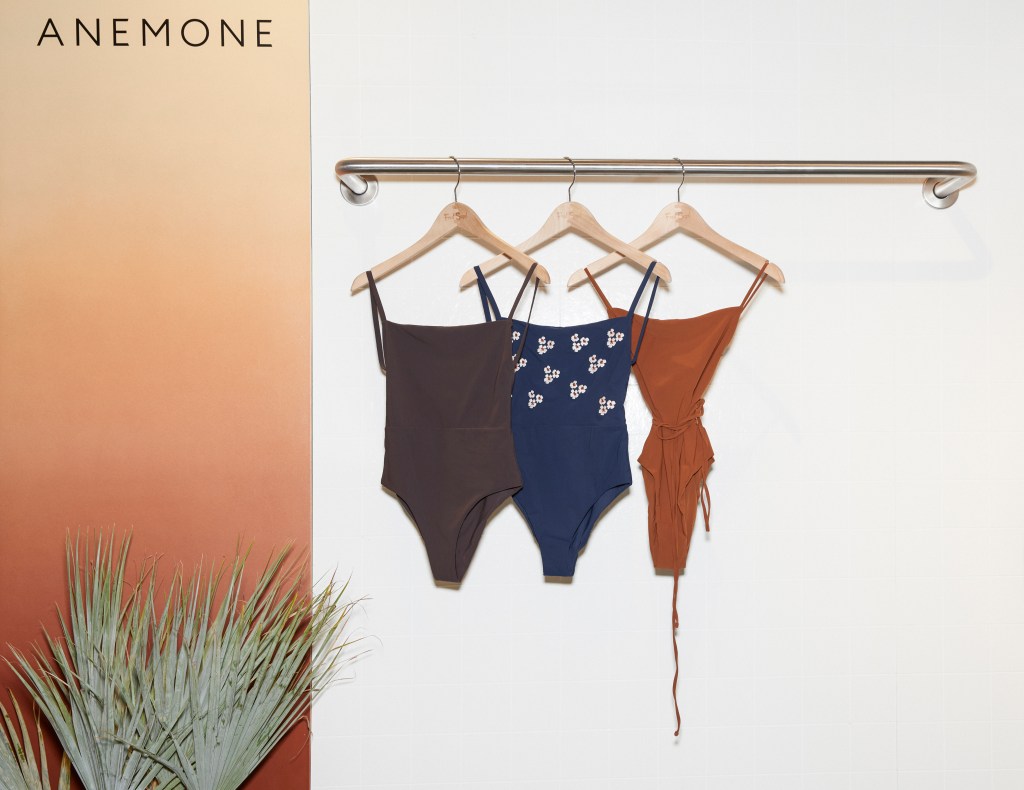 Anemone swimwear and resortwear range in cost between roughly $135 to $500.  Courtesy/Erik Melvin