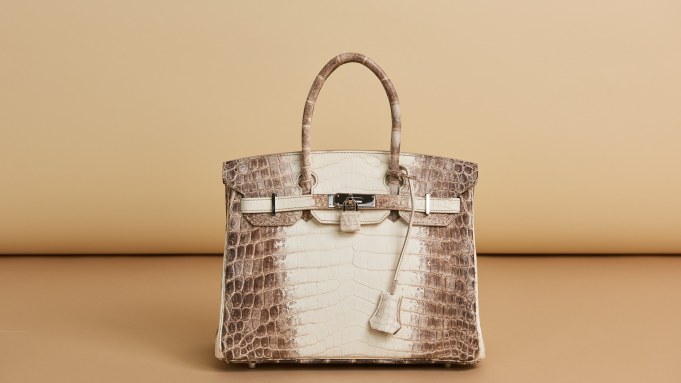 The exclusive Birkin is made from the albino Nico crocodile hide, and an extensive dye process with a gradation meant to evoke the smoky gray and pearl white colors of the snow-capped mountain range. The bags sold for about $100,000 back in 2008 — David Beckham bought one for his designer wife Victoria to add to her Birkin collection — while one made from the same hide and dye process, but encrusted with more than 240 diamonds and 18-karat-gold hardware was sold last year by Christie’s auction house for $379,261. The bag still sells for well over $100,000 on the primary and auction markets, and are difficult to acquire since the luxury accessories firm produces so few of them.

The bag’s host site — at the corner of 57th Street and Madison Avenue — is also a celebration of the opening of Rebag’s second Manhattan flagship location. The new site features Rebag’s signature pastel yellow color, as well as a floor to ceiling glass storefront that offers anyone passing by a look into the brand’s “handbag heaven” displays. The site will be home to more than 350 bags. The store design was by Red Antler, while the fixtures by are Waka Waka Studios.

The company in November opened its first physical store in SoHo, at 390 West Broadway, as a pop-up site to introduce consumers to the Rebag brand. After the holidays, the company elected to stay at the site and make it a permanent location, turning it also into its first flagship.

Both stores include a section called “Rebag Bar,” an area where sellers can bring in previously owned bags for an instant quote and authentication. Most transactions can be completed within an hour, and are doable because the in-house authenticators are on the premises. Bags bought by the company on the spot will become available for resale within 24 hours, following the usual cleaning and processing requirements that include photos so the item can be placed on the shelf and be available for purchase online.

Charles Gorra is founder and chief executive officer. A former Goldman Sachs financial analyst, he got the idea to target the luxury handbag resale market in 2012 while working as a consultant to Rent the Runway. The company raised $15.5 million in a Series B round last year, bringing the aggregate raise to $28 million.

As for how he managed to snag a rare Birkin, Gorra said, “This unique piece came out of our proprietary sourcing network. Our VIP team worked with a collector to source the Hermès Himalayan Birkin. Thanks to Rebag’s transparent pricing and straightforward selling process, the seller was able to monetize this fantastic, but illiquid asset, quasi-instantly.”

Rebag is part of the growing luxury resale marketing, which includes TrueFacet for high-end watches; 1st Dibs for art and furniture, and The Real Real, for women’s apparel and accessories.