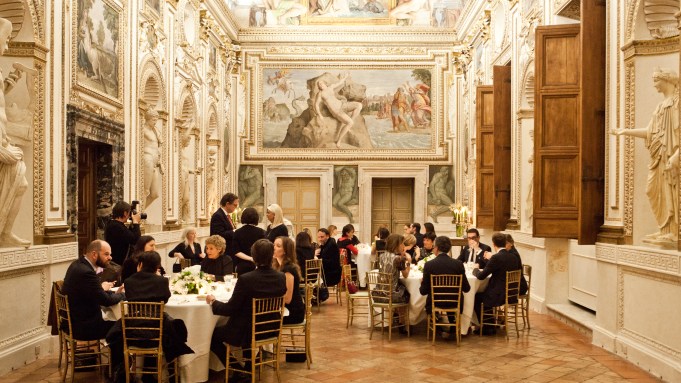 Through the initiative, launched in 2011, some of the companies under the LVMH umbrella — including Acqua di Parma, Bulgari, Emilio Pucci, Fendi and Louis Vuitton — open the doors of their laboratories and headquarters to the public in order to showcase the exclusive craftsmanship behind the group’s creations.

“People adore this initiative, which enables us to show the artisanal and artistic approach, which is the signature elements characterizing the brands of our group,” said Gabriella Scarpa, president of LVMH Italy.

From May 20 to 22, LMVH will organize guided visits in more than 50 sites controlled by a range of brands, including Berluti and Loro Piana, which are taking part in the initiative for the first time this year.

May is going to be a busy month for Scarpa, who is also chief executive officer of luxury beauty and lifestyle brand Acqua di Parma.

“We are hosting a two-day big event in Parma on May 25 to 26 to celebrate the 100th anniversary of the brand,” she said. For the occasion, Acqua di Parma will revamp the bottle of its original eau de cologne and will present a book telling the story of the brand. This will feature words by Italian journalist Antonella Boralevi, while Giovanni Gastel shot the images. Scarpa also revealed that during the event, ballet star Roberto Bolle will be among those performing at Parma’s Teatro Regio.

Discussing the expansion strategy of the brand, Scarpa said that Acqua di Parma will open a new store-cum-barber shop in Miami in September. “We are definitely looking at the United States, Asia and the Middle East as the most appealing markets where to expand our presence,” she said.

Emilio Pucci ceo Mauro Grimaldi, who joined the company in July, also attended the dinner at the French embassy.

Grimaldi said the company is opening a store in Capri on Via Camerelle this summer. “Emilio Pucci opened its first store ever in Capri and it has been about 10 years” since the company had one there, he said, adding that the boutique will show an evolution of the current store concept, which will be customized for the location.