The next LVMH Prize for Young Designers ceremony has been scheduled for Sept. 4 in Paris.

Delphine Arnault and Karl Lagerfeld at the LVMH Prize in 2017.

His legendary fashion career was ignited by an award. In his twilight years, he acted as a judge for the LVMH Prize for Young Fashion Designers, leaving most contenders starstruck.

And now he will be immortalized with a fashion prize in his name. LVMH Moët Hennessy Louis Vuitton confirmed exclusively to WWD that its Special Prize will henceforth  be named the Karl Lagerfeld Prize.

The first one is to be presented during the sixth edition of the contest on Sept. 4 at the Fondation Louis Vuitton.

“Karl Lagerfeld, creative director of the house of Fendi since 1965,  was involved in the prize since its launch,” said Delphine Arnault, the force behind the high-profile design competition. “He was fully committed to it since Day One,  transporting us with his enthusiasm and his energy, sharing with everyone, whether other jury members or candidates, his culture and his passion for fashion. We shall always cherish those precious moments.”

A key talent scout at the French luxury conglomerate and the number-two executive at its flagship Louis Vuitton brand, Arnault added that the Karl Lagerfeld Prize “naturally perpetuates the closeness we developed  over the years and is a tribute to the man’s unique creative genius, to his ability to turn Paris  into the fashion capital of the world.”

The winner of the Karl prize is to receive 150,000 euros and a one-year mentorship program provided by a dedicated  LVMH team offering expertise in such areas as intellectual property, sourcing, production, distribution, image, communication and marketing.

Established in 2014 and unique in its online-only application process, the LVMH Prize is open for anyone under age 40 who has produced and sold at least two women’s or men’s ready-to-wear collections. Each year, three graduates from fashion schools are also recognized.

This year’s prize attracted more than 1,700 applicants from 100-plus countries. 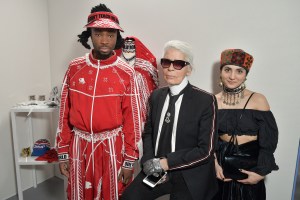 The special Karl Lagerfeld Prize is bound to be coveted, given his stature as one of the most accomplished and admired fashion figures of the last century for his work at Chanel, Fendi, Chloé and his signature brand. He died last February at age 85.

Lagerfeld famously won an award from the International Wool Secretariat in 1954, as did Yves Saint Laurent, proving the potential and value of such early recognition.

The finalists for this year’s LVMH Prize — which comes with 300,000 euros plus a year of coaching from experts at family-controlled LVMH — are Anrealage, designed by Kunihiko Morinaga; Bethany Williams; Bode by Emily Adams Bode; Hed Mayner; Kenneth Ize; Phipps by Spencer Phipps; Stefan Cooke by Stefan Cooke and Jake Burt, and Thebe Magugu.

In the past, the jury has handed special prizes to Hood by Air’s Shayne Oliver, Simon Porte Jacquemus and others. Grand prize winners have included Masayuki Ino of Doublet, Marine Serre, Grace Wales Bonner, and Marta Marques and Paulo Almeida of Marques’Almeida.

Lagerfeld took a grandfatherly approach to the young winners and contenders, most of whom were gobsmacked to interact with the fashion icon.

The inaugural prize went to Canadian designer Thomas Tait, whose submission to the judges included a booklet of delicate, X-ray-like etchings with a superhero undercurrent. “He’s an artist in a way,” Lagerfeld said of Tait at the time. “He sketches very well, and as you know, I like sketches.”

The new Karl prize is the latest LVMH-led tribute to the late designer, who had cultivated a close friendship with LVMH chairman and chief executive officer Bernard Arnault and his wife Helene, an acclaimed pianist. Most recently, LVMH-owned Fendi, where Lagerfeld had designed its furs and rtw since 1965, dedicated its fall 2019 couture show in Rome to him, parading 54 looks, one for each year of his celebrated tenure there, and some inspired by his past collections.

Meanwhile, the Karl Lagerfeld brand has enlisted a host of his famous friends and admirers, from Cara Delevingne and Kate Moss to Lewis Hamilton, to design white shirts that will displayed during Paris Fashion Week in September and then auctioned off for charity.