At a hotdog stand and a subterranean disco.

When Tom Ford revealed in December that he’d be taking his runway on the road to Los Angeles, showing his fall 2020 collection on Feb. 7 at Milk Studios, two nights before the Oscars, there was speculation that other designers might follow from New York in drafting on the momentum of awards season.

There hasn’t been a mass migration — far from it — but there are two other shows on the docket for next month: M Missoni at quirky L.A. landmark Pink’s Hot Dogs on Feb. 4, and Baja East the afternoon of Feb. 7 at Ian Schrager’s Edition Hotel in West Hollywood.

The M Missoni show is being supported by IMG’s creative and production agency Focus, and will likely be a one-off, said designer Margherita Maccapani Missoni, adding that she was attracted to showing in L.A. because “it’s a place where fashion is not constrained by the rules of the system and is positively influenced by different lifestyles and passions.”

Her own creative process has included upcycling fabrics and ideas from Missoni archives — “literally and organically using pieces of Missoni’s past to create something new and surprising,” she said, noting that since the collection has multiple deliveries and capsules, she can move quickly.

“Through our collaborative discussions with Margherita, and because of the intersection of so many cultural flash points during NYFW: The Shows, Los Angeles felt like the perfect extension and place for Focus to bring M Missoni to life as an experiential fashion presentation that will capture the spirit of the house and add to the energy that will be cross-continental at this time,” said Dominic Kaffka, vice president of production and creative services at IMG and managing director of Focus.

Meanwhile, Baja East designer Scott Studenberg said he had already planned on doing his show in L.A. even before Ford’s news. “We’ve been talking about it since the brand launch. Last season, I brought the West Coast to the East, uprooting my Laurel Canyon living room, and now I’m inviting everyone to a desert disco in my hometown,” he said, noting that the show will be held in the hotel’s subterranean club, hung with disco balls, where he saw Chaka Khan perform as part of the hotel’s opening festivities. “It’s my version of L.A. and the contrast…at my house in Laurel Canyon, you can hear goats and chickens. But five minutes away, there’s this place that’s totally luxe. That’s my brand, glam-leisure.”

He’s excited to be able to invite L.A. friends, buyers and celebrities (Billy Porter recently wore a Baja East caftan on Golden Globes weekend) — and for others to watch via social media. After his show, he’ll be heading to New York for sales.

Studenberg and former partner John Targon originally launched Baja East in New York in 2013 with the concept of loose, luxury unisex wear and moved it to L.A. in 2018. But they found the unisex concept a hard one to sell at retail, so Studenberg refocused on women’s advance contemporary, and relaunched for spring 2020 at New York Fashion Week. 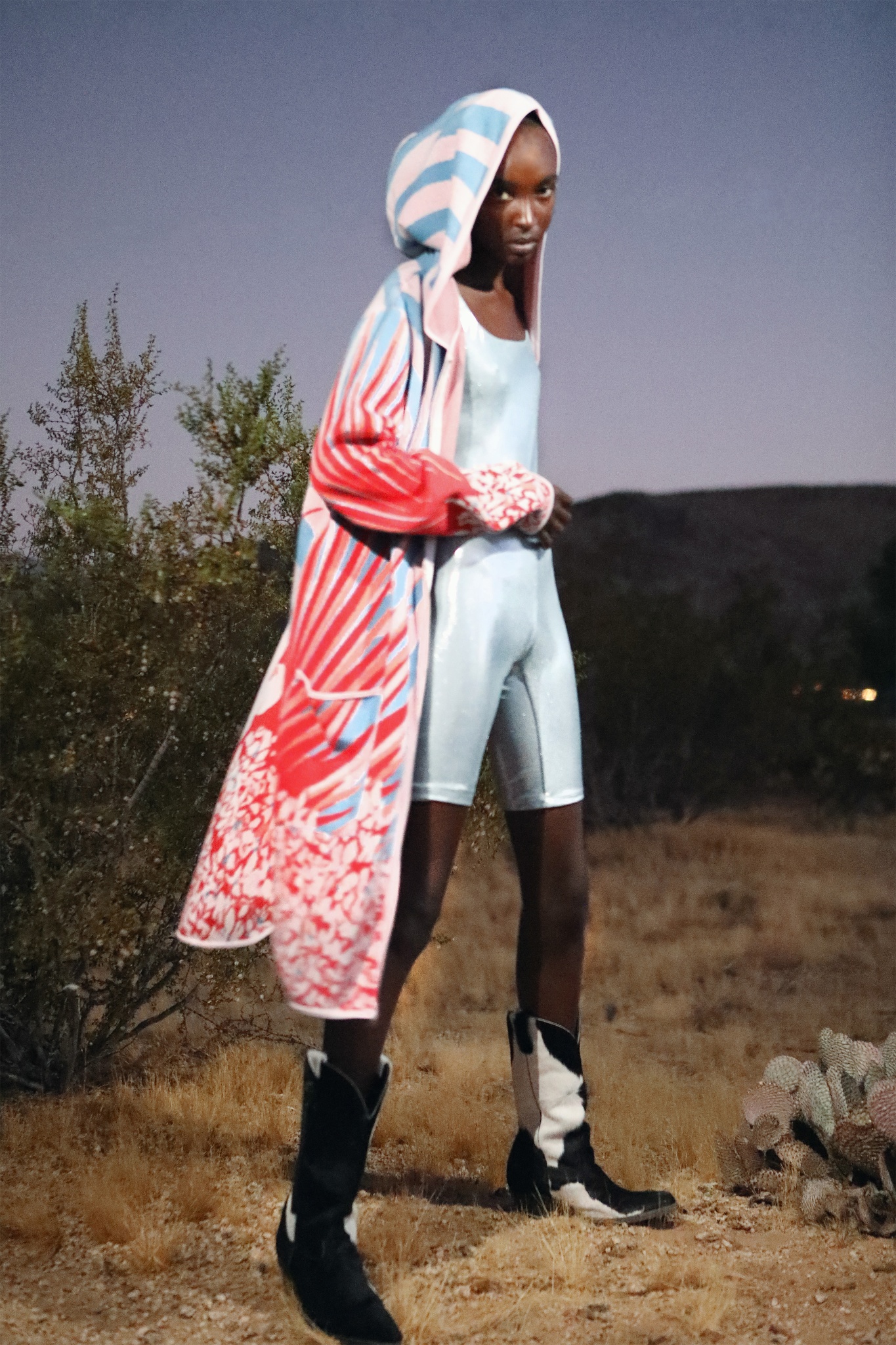