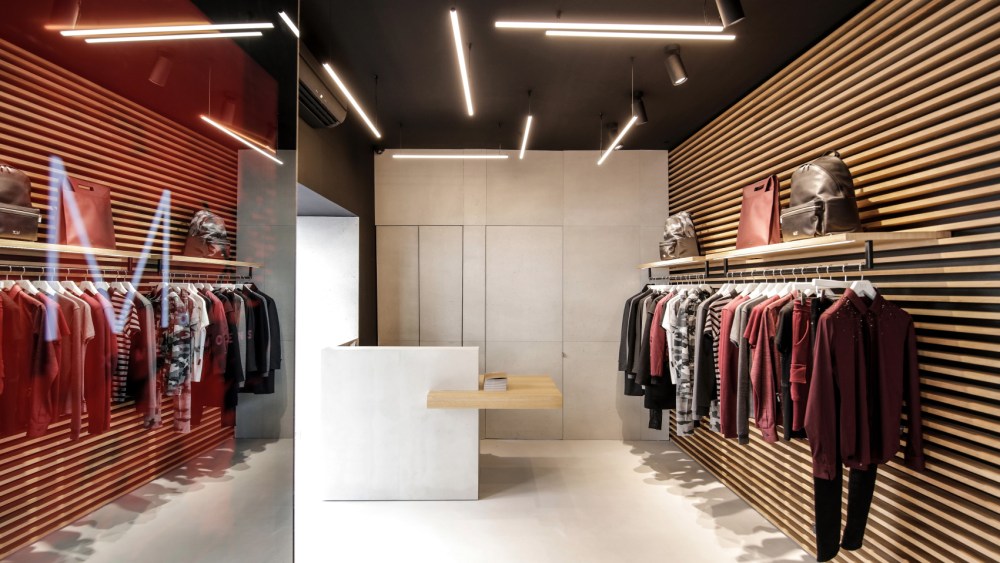 BUSY BEE: It’s going to be a hectic couple of weeks for Maxime Simoëns. On Thursday evening, he celebrated the opening of his first boutique, for his fledgling men’s label, M.X. Maxime Simoëns, while on July 2, the designer will make his debut as creative director of Azzaro couture.

The paint was barely dry on the walls of the 1,400-square-foot space on Rue Vieille du Temple for the party, which also served to show off his fall collection for the sporty men’s brand, which has chosen to operate on a see-now-by-now model.

Upstairs, the space is designed like a locker room, with slatted wooden benches and glass and concrete features. Stepping downstairs, meanwhile, takes the visitor into a space clad in white tiles to resemble the showers in a gym, right down to the square stools in place.

“It’s a new step in my career as a designer, to have direct access to the customer,” said Simoëns, adding that the brand, now in its second collection, is “doing well.”

He observed, “Designing for men is a completely different exercise. A woman is looking for a particular item of clothing, whereas a man looks for a world, a lifestyle. That’s why I wanted the boutique to be a strong statement.”

The fall collection once again tackled sporting territory, this time mountaineering, in a muted palette built around gray, navy blue and burgundy. Roughly shaped miniature semiprecious stones adorned a burgundy shirt. Another featured an allover print with topographic map features, a motif also found on jackets and T-shirts, while the tailored wool pieces were decorated with tiny contrasting dots. Mountain views and karabiner motifs were printed onto sweatshirts, while the camouflage theme of Simoëns’ debut collection was reinterpreted with black studs for fall.

As to his first collection for Azzaro, for which Simoëns was named artistic director in March, the designer said to expect “something structured, architectural, hyper-sexy and glamorous,” but that it would not be like his previous collections for women. “It’s a bit stressful, as we’re running late,” he commented. Simoëns put his namesake women’s ready-to-wear line on hold in 2015.