A group of 28 designers took over their country’s embassy with a one-night-only exhibition of their designs. 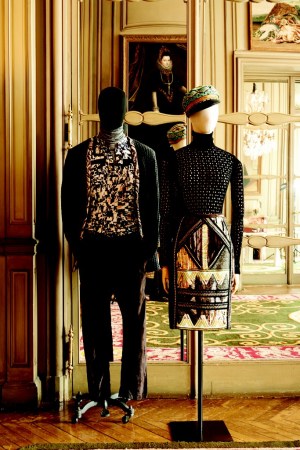 MADE IN SPAIN: Going against economic austerity, a group of 28 Spanish fashion designers, including Agatha Ruiz de la Prada, Custo Barcelona, Devota & Lomba, Etxeberría and Andrés Sarda, took over their country’s embassy in Paris on Thursday night with a one-night-only exhibition of their designs. “People ask me, what is your business plan; I say it’s not to crumble,” said Ruiz de la Prada, whose 33-year-old brand is sold in 120 countries. “But I’m a democratic designer,” she noted about her success. “I serve all age groups and the poorest people; I’m inexpensive.”

Her daughter Cosima Ramirez, in charge of Ruiz de la Prada’s international expansion, explained, “Only high end and fast fashion are doing well in Spain, the ones in between are struggling terribly.” The young entrepreneur said she was planning to take her mother’s brand to Asia via Malaysia and Indonesia, before moving into China and Japan, within the next five years.

Roberto Etxeberría divulged he would show his next spring collection on the official New York fashion calendar in September, at Lincoln Center, engaging “friends and fans instead of [professional] models.”

“Yes, we could use more audacity,” observed Mireille Suzanne Francette Porte, better known as Orlan, who also attended the cocktail party. The French artist, whose trademark facial implants were stylishly covered with glitter, said she was going to Shanghai in July with a collection of works “exploring new technologies,” while her Paris exhibition slated to kick off in September was to showcase her interpretation of reality via masks she collected from the Beijing opera.

In May, the “Made in Spain” show is traveling to Portugal.