Sam Kass, former White House chef and senior policy adviser for nutrition under the Obama Administration, was guest of honor.

NEW YORK — A raft of well-heeled Manhattan socialites gathered at the Metropolitan Club next to Central Park on Tuesday for the Madison Square Boys & Girls Club’s annual Style of Life luncheon — and they certainly didn’t forget to bring their purses with them.

The fundraiser, which was held in the club’s ornate ballroom facing Fifth Avenue, raised over $200,000 through a silent auction and raffle, double the amount seen in 2017. Donated prizes up for grabs this year included a luxury Belize vacation, a Canyon Ranch getaway and a Peloton.

Among the 200 guests in attendance were SoulCycle chief executive officer Melanie Whelan, who made a beeline for guest of honor Sam Kass, the former White House chef and senior policy adviser for nutrition under the Obama administration, to no doubt chat all things health and fitness.

Kass told WWD that his involvement in the charity, which organizes extracurricular programs for children and teens in many of New York’s most underserved communities, stretched back to his time at the White House.

“I know how important their work is in that critical gap in the afternoons where many of the kids go astray — not just for health, but everything else as well,” he said.

As for what the Obamas’ favorite meal was, he added that it was more about eating a balanced diet than a particular beloved dish: “Eating healthy food and then having fun and not worrying about it on the weekends — having a burger and some french fries.” 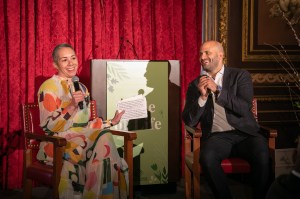 Also speaking at the event was 19-year-old Grace Assabil-Bentum, who told the audience that when she moved from Ghana to the U.S. at age 6, her mother struggled to make ends meet, resulting in periods spent at shelters and food being sometimes scarce.

Her mother had to leave her young child at home alone in some instances as she couldn’t afford a babysitter, but after discovering the Boys & Girls Club, she was later able to send her to a safe place where she would get a hot meal and support.

“It was a great place for me to escape my harsh reality for a few hours,” added Assabil-Bentum, who is now a college freshman with hopes of becoming a doctor.

Other attendees included Hearst president Troy Young, Town & Country editor in chief Stellene Volandes and Cosmopolitan editor in chief Jessica Pels, while Jenny B. Fine, executive beauty editor of WWD and editor in chief of Beauty Inc., served as the mistress of ceremonies.