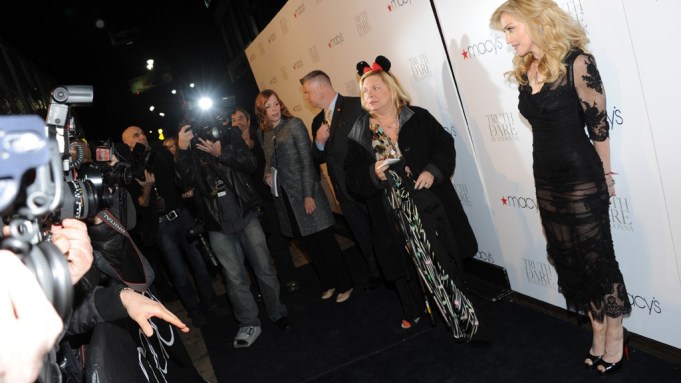 MADONNA MAYHEM: Madonna met her fans Thursday night at Macy’s Herald Square for the launch of her first fragrance, Truth or Dare. Macy’s presold 300 of the $151 kits, which included a 2.5-oz. Truth or Dare by Madonna eau de parfum spray, a 1.7-oz. eau de parfum spray, a 6.7-oz. body lotion, a T-shirt, a deluxe copy of Madonna’s new album, “MDNA,” and the 1991 “Truth or Dare” documentary on Blu-ray disc. Unlike most of Macy’s celebrity events, those who shelled out for the sets weren’t allowed to get a photograph with the Dolce & Gabbana-clad Madge, or even her signature on the fragrance — instead, the group was herded into a tent erected in Herald Square for a press conference of sorts — but with the buyers. Just 10 were allowed to ask questions before the pop icon was ushered upstairs for press interviews.

The celeb-weekly press crowd on the carpet primed her with a peppering of inquiries on topics from her daughter Lourdes (“She’s a rebel, too,” Madonna said. “She told me whether she liked it or not.”) to that already infamous Truth or Dare TV spot: “I don’t think it’s raunchy. I think it’s great.”

The scent is, in the U.S., a Macy’s exclusive, and hit counters March 26. It will roll out to international markets beginning in May, adding up to about 20,000 doors worldwide, including the U.K., France, Asia, the Middle East and travel retail. Industry sources estimated that it is on track to do about $60 million at retail globally from April through December. About 35 percent of that figure is expected to be done within the U.S. Macy’s is also the exclusive retailer for Madonna’s Material Girl junior apparel line.