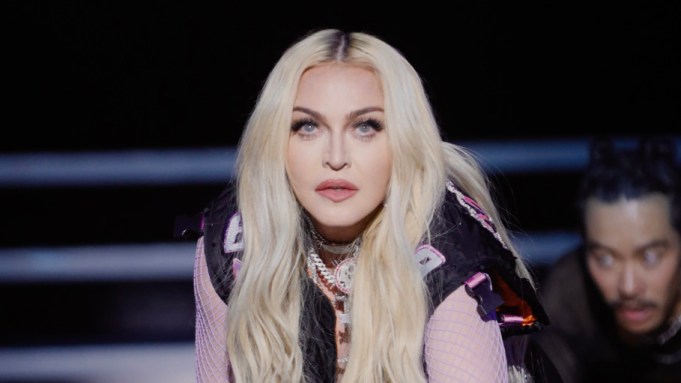 On Thursday, the singer performed at New York City’s Terminal 5 as part of the World of Women’s NFT NYC event, kicking off a weekend of festivities celebrating Pride. The music legend brought out a slew of guest stars, such as Saucy Santana and Tokischa and notable drag queens, who performed with her on stage.

For the night, she wore a yellow and pink Adidas hoodie with matching shorts over a black bustier and sheer tights. She later changed into a black cropped vest with patches of the letter “M” all over paired with a lace corset, sequin shorts and black combat boots. She accessorized with silver chain bracelets, long-sleeved fishnet sleeves and leather fingerless gloves.

To start off the event, Tokischa took to the stage to rap her song “Linda,” a collaboration with Spanish singer Rosalía. Then Madonna joined her, singing her hit 2005 song “Hung Up,” before the two started dancing together, eventually leading to a kiss.

Later, she surprised her fans when she brought out Saucy Santana, born Justin Harris, for a rendition of her hit song “Material Girl.” The American rapper also has a song with the same name, which went viral on TikTok earlier this year.

Drag queens also busted out performance segments of their own, with Bob the Drag Queen, who won the eighth season of “RuPaul’s Drag Race,” sang “4 Minutes” with Madonna’s son David Banda, while Violet Chachki, who won the seventh season of “Drag Race,” twirled around for an aerial act on a chair to Madonna’s “Justify My Love.” Pixie Aventura also made an appearance.

To conclude the show, all the special guests joined the pop icon on stage for a performance of her 2009 compilation “Celebration.”

See Madonna Then and Now: From the WWD Archives