The French label is teaming up with the Paris-based designer on a collection of a dozen pieces. 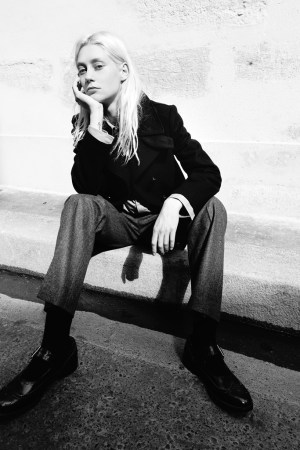 NOT QUITE STANDARD: French fashion label Maison Standards is teaming up with uniform designer Pascal Humbert to create a collection of a dozen pieces.

The new line, set to launch in September, initially includes two suits for women, two for men, a skirt, military shirts and a sailor coat,with prices ranging from 70 euros, or $80 at current exchange, for the shirts to 195 euros, or $222, for the navy sailor coat. The suits are to be manufactured at Italian high-end woolen mill Vitale Barberis.

“For us, it’s about broadening our offer, with a new wardrobe that is more chic, more structuring,” said Uriel Karsenti, founder of Maison Standards. Karsenti said Humbert’s design work on uniforms grabbed his attention because of its similarities with Maison Standards’ raison d’être, which is to “find the right harmony between discretion and recognizable symbols.”

The Paris-based designer, who in the past has presented a signature label during couture week, designs uniforms for luxury brands, including most recently Biotherm.

“[The silhouettes of the Maison Standards line] are very androgynous. But men’s clothes are made for men and women’s for women. We have different measurements,” Humbert said.

The same holds true when it comes to making uniforms:  “It’s nearly impossible to make something that fits everyone. We usually adjust the silhouette depending on the sizes,” he said. His approach to uniform is more like “a wardrobe where people can chose from.”

Karsenti started Maison Standards with a spring 2013 collection, with the idea to offer standard pieces of the wardrobe “with no physical store and no intermediaries.” He forecasts revenues of around 1.5 million euros, or $1.7 million at current exchange in 2015.

The line is to be presented during Paris Fashion Week on Sept. 29 and will be stocked exclusively at Humbert’s store and Nouvelle Affaire gallery space in the Marais neighborhood of Paris and on Maison Standards’ Web site.

Meanwhile, Maison Standards is to enter Opening Ceremony with a few pieces from its main line in New York and Los Angeles in September.