Sports journalist Malika Andrews recently made history as the first woman to host the NBA Draft on ESPN on June 23 — and the landmark moment appropriately came on the 50th anniversary of Title IX.

The Emmy-award-winning reporter, who in May won the Sports Emmy for Outstanding Personality/Emerging On-Air Talent, wore a mustard yellow suit with a tailored blazer and tapered trousers, which hit right above her ankles and featured a small front slit. Andrews paired the suit with a light blue blouse decorated with white polka dots trimmed in yellow. For footwear, the journalist wore strappy mustard suede stilettos with a pointed toe.

Andrews wore her hair in a slicked-back center-parted ponytail for the broadcast, accessorizing with simple gold jewelry.

During a portion of the NBA Draft live show, the 27-year-old took time to acknowledge the game-changing impact of Title IX, a federal law that broadly states no person should be barred from participation or face discrimination on the basis of sex in any education-based programs or activity receiving federal assistance. The non-discrimination law is perhaps most noted for broadening access to sports for women, though it was originally created to level the playing field in college admissions.

During the ESPN telecast, Andrews spoke about the impact of Title IX from her perspective as a woman in the sports industry.

“What’s become so beautiful is that it’s become normal,” she said during the telecast. “It’s become the status quo — not even noteworthy. And I mean that in the best way.”

On the 50th anniversary of #TitleIX, it is an honor to share this stage at the NBA Draft with @chiney and @McNuttMonica to talk about how Title IX changed the game for women and the work we must still do to help the next generation. pic.twitter.com/oCcxp0TuSx

During the segment, Andrews was joined by two other ESPN commentators — Los Angeles Sparks forward Chiney Ogwumike and journalist Monica McNutt — to provide their perspectives on Title IX’s current impact and future importance. Notably, all three journalists are Black women, with Andrews saying she’s never seen “so many faces that look like ours” on an ESPN broadcast.

“What brings me joy is that while we may occupy the first to play this or the first to host that,” Andrews said during the segment, pointing to herself, “we’re not the only.”

Though Andrews’s on-air talent deserves the highest recognition, the NBA Today host is also noted by viewers for her chic and fashion-forward style. The TV personality often wears traditional business-forward pieces — like tailored suits, blouses, and dresses — but adds a signature element to her looks with color and patterns.

Even when wearing a little black dress, Andrews elevates the style with innovative cuts and additional color. While attending The Wrap Women’s Power Summit in December 2021, for instance, Andrews wore a long-sleeve black Diane von Furstenberg dress with a tulip hem and a mock neck on the red carpet. The piece was elevated with ruching down the length of the dress, with Andrews pairing the look with cranberry pointed heels, statement jewelry by Moondance Jewelry, and an intricate braided hairstyle.

Just a few months earlier in October, Andrews wore another little black dress to the premiere of Netflix’s “Colin In Black and White” in Los Angeles. For the event, the star reporter wore a long-sleeve black dress with a conservative mid-calf hem and an asymmetrical neckline. She added a signature pop of color to the look with hot pink heels with a silver metallic toe, carrying a structured black handbag. 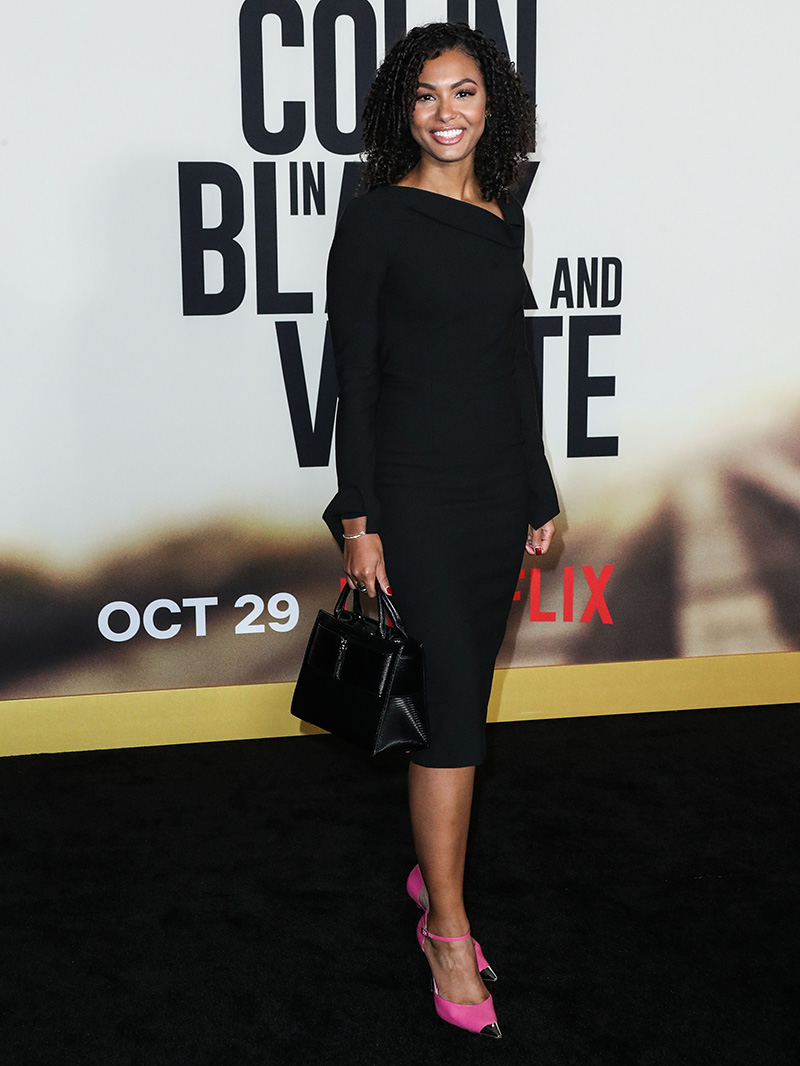 And with Andrews recently blazing a trail with her NBA Draft hosting duties, you can be certain there will be more style to see—and breaking news to report—from the award-winning sports journalist.