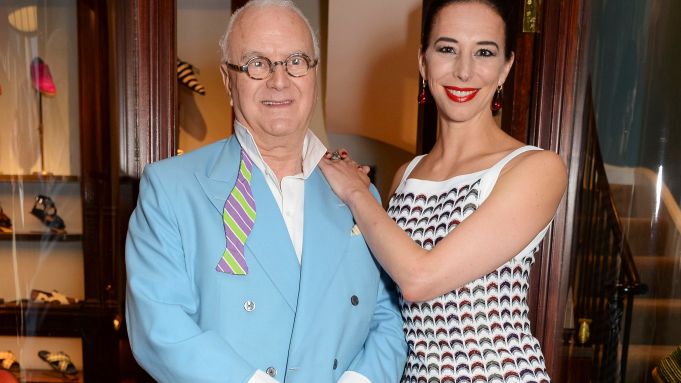 MANOLO MADNESS: The temperature was soaring inside London’s Burlington Arcade on Wednesday night, but the guests — not surprisingly — refused to go home. They were there to mark the opening of fashion footwear doyen Manolo Blahnik’s first men’s store, an Edwardian jewel of a space, and they were in a joyous mood.

Blahnik, who was looking cool in a sky-blue suit and artfully undone bow tie with stripes, played host to press, stylists, fellow luxury retailers and industry investors at the Mayfair arcade, which had been closed off for the night.

Evangeline Blahnik, the designer’s sister and an architect of the business, and her daughter Kristina Blahnik, the company’s chief executive officer, mingled in the arcade, which had been lined with flower carts showcasing the men’s shoes and a rainbow of colored paper lanterns ahead of the Pride in London parade on Saturday.

There were do-it-yourself ice cream sundae and cotton candy stalls, while guests drank Pimm’s, Britain’s fruity (but alcoholic) summer drink, and Champagne and dipped into icy buckets filled with oysters. At the entrance, dapper men passed out copies of The Blahnik Chronicles, a newspaper dedicated to the designer and his style.

Features included “The Gospel According to Manolo,” with rules to live by, such as, “Always be prepared for when inspiration might strike,” “Look impeccable,” and “Learn your craft: Consistency and devotion to one’s work will always win in the end.”

While guests celebrated outside, the man himself walked some people around the tiny store, which he designed. It has original — and reproduction — Edwardian mahogany wall panels and shelves and a rug created by Blahnik with an abstract wave motif rolling around the edges. Blahnik’s pictures, which will hang on the wall panels, still hadn’t arrived.

Asked about designing for men versus women, Blahnik said shoes for men take longer to make — and are not an easy sell. “Men don’t get excited about getting dressed — they tend to be boring,” said the designer. That said, he’s still having fun making them.

“Look at this espadrille!” Blahnik said, picking up a zebra patterned, lace-up shoe with a soft, corded sole. “You can fold it up and put it in your pocket,” he added with a laugh as he fanned himself with one of the party invitations.

The first Blahnik shop opened in Burlington Arcade in 2016, selling men’s and women’s shoes, the bag collection and limited-edition designs. The new, dedicated men’s store is next door, at 34 Burlington Arcade. As reported, it spans 411 square feet and was formerly occupied by a pen shop called Penfriend.

The designer opened a shop earlier this year in Geneva, and in coming months will take a dedicated space at Selfridges.