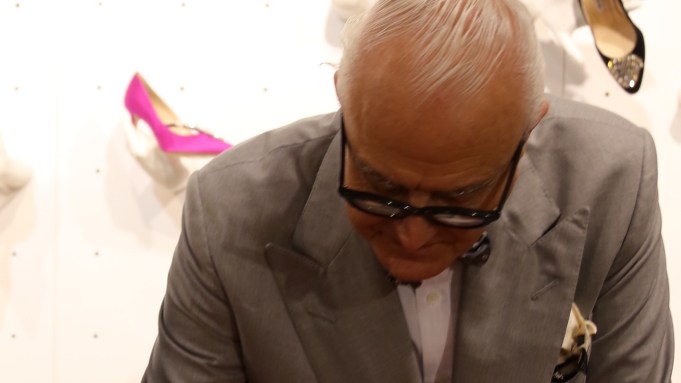 SEEING DOUBLE: There was a double cause for celebration at Liberty this week, which invited customers to a Manolo Blahnik book signing in its shoe hall. It was the designer’s only appearance in London to promote his book, “Fleeting Gestures and Obsessions.”

The evening also marked the unveiling of an exclusive collaboration between Blahnik and Liberty to mark the store’s 140th anniversary. The designer has created a limited-edition version of his Nadira pump and the Nadi clutch bag. He’s also done a black-and-white version of one of the most recognized Liberty prints, the Hesketh. “It reminds me of Aubrey Beardsley’s drawings which I always loved,” said the designer of the two-toned Hesketh.

Blahnik’s connection with the department store goes back to his teenage years, on one of his first trips to London.

“I fell in love with it right away. It’s a traditional English place with a lot of history and soul; the beautiful architecture, the wooden interiors and the tranquil atmosphere inside really spoke to me. It doesn’t feel like a big department store; it’s more cozy, and I really like that,” he said.

As well as never-before-seen photography from his extensive 40-year archive, the book includes contributions from Pedro Almodóvar, Sofia Coppola and Cambridge professor of classics Mary Beard, among others, providing an insight to the varied set of sources that spark Blahnik’s creativity.

“I wanted to share my passions with people and that is why I gathered all of them together in one tome,” said the designer. “It was a very long process and it took a lot of my time and effort. But I very much enjoyed traveling and talking to people.”