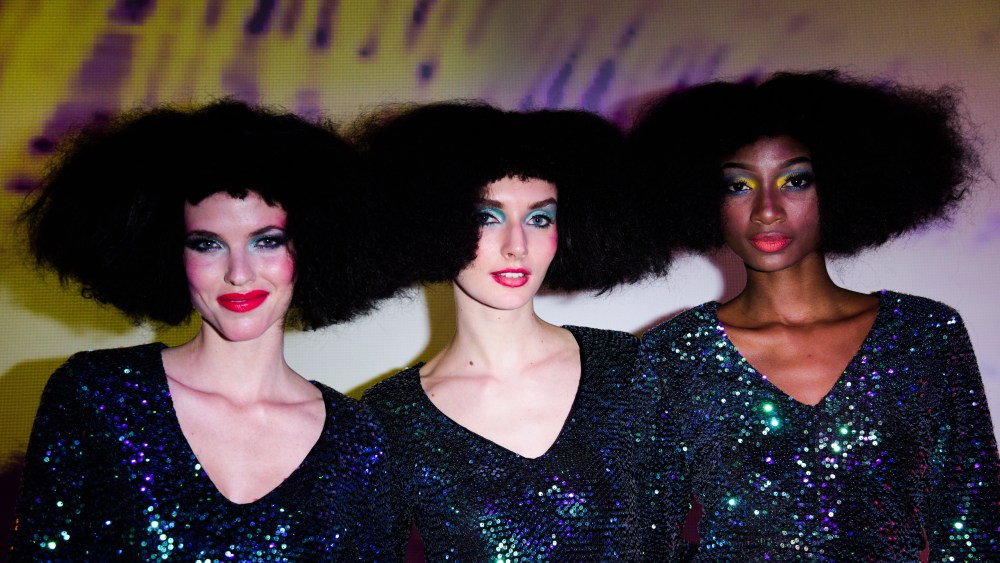 MARC THE NIGHT: Nothing like a 10 p.m. start time to send the message loud and clear: This wasn’t going to be your average party.

The dress code for the evening mandated “chic Eighties glamour” with detailed specificity. As stated on the invite: “Think Gloria von Thurn und Taxis at Le Cirque with Stephanie and Caroline of Monaco….Punk princess with chiseled cheekbones and exaggerated brows, make Blondie and Brooke Shields proud…A decorative frenzy in electric paradise; more is more. No posers and definitely no preppies.”

Two women — every inch of their bodies covered in hot pink glitter — greeted guests at the entrance, silently and sensually writhing their bodies. Further inside, a pair of drag queens, Kyle Farmery and Aquaria, stood tall on elevated platforms inside of gigantic Marc Jacobs shopping bags. Both of them wore sky-high heels while passing out arcade tickets, and one wondered if their feet might start to hurt after several hours of standing and posing. “I wear heels all the time; I’m an all-or-nothing girl,” Farmery said. “Drag queens are everything in fashion.”

Model Simone Thompson, better known as Slick Woods, said she’s been keeping superbusy. The rising star — known for her androgynous style and no-fuss attitude — accompanied Rio Uribe of Gypsy Sport to the CFDA Awards over the summer. “I’ve just been waiting for my campaigns to come out, working on films and working on designing my own shoes,” she said. “I wake up in the morning, and I’m like, ‘F–k, this is real. This is real life.’ I have to pinch myself.”

There were plenty of activities on deck, from a photo booth area to a claw machine game in which guests could win Marc Jacobs beauty products and tote bags.

Around midnight, the rager was in full swing. And during a tense U.S. political climate — one in which what many deem basic human rights are being thrown into question — it was comforting to be in a room full of people being exactly who they wanted to be, freak flags flying high.

But was Marc, the man of the hour, ever going to show up? “Maybe he is; one never knows,” cooed Ladyfag.