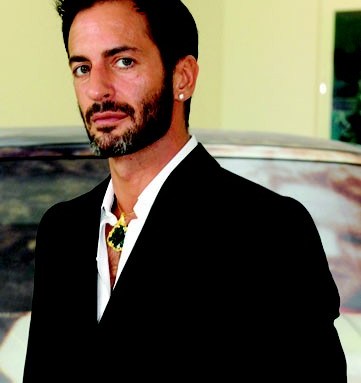 AMERICAN GRAFFITI: Marc Jacobs, whose 2001 collaboration with Stephen Sprouse opened a floodgate of possibilities for Louis Vuitton, has another major homage in the works, WWD has learned: Sprouse. “I totally channeled Stephen,” Jacobs said of a new capsule collection he designed for Vuitton, to be sold in tandem with a retrospective at Deitch Projects in New York in January. Sprouse, who died in 2004, was a major figure in New York’s art and fashion scene in the Eighties, known for his streetwise aesthetic and Day-Glo graffiti. The new Vuitton range, which Jacobs describes as “very Sprouse,” includes T-shirts and dresses in matte jersey, along with sunglasses, a towel, a sweatband and bracelets. And the pièce de résistance is a custom-made skateboard and skateboard case, which Jacobs said would be auctioned off.

EAU DE PUGH: Gareth Pugh, who once encased models’ heads in latex masks, and Jeremy Scott, who in the past dressed a model in a trash can-inspired dress, have turned their noses to fragrance. The pair, as well as Alexandre Herchcovitch, Bernhard Willhelm, Cosmic Wonder Light Source and Preen, have each concocted a perfume as part of the Six Scents Fragrance Initiative to raise funds for the Designers Against AIDS International AIDS Awareness Education Center in Antwerp, Belgium. Two thousand bottles of each of the limited edition unisex fragrances will be available by yearend in stores including Colette in Paris and Seven New York. Scott took a frisky turn for his fragrance, which is dubbed Illicit Sex, while Pugh’s, which is dubbed Diagonal, is meant to have an ambiguous slant and contrast light and dark plus masculine and feminine elements. Six Scent is a collaboration between fragrance house Symrise, creative consultancy Metaproject and Seven New York.

GHESQUIERE SEEING GREEN: Nicolas Ghesquière is adding the role of costume designer to his many talents. The Balenciaga designer will be in New York later this month to see his creations put to use in final rehearsals for an original performance to be held Oct. 24 and 25 at the Guggenheim’s Peter B. Lewis Theater. Visual artist Dominique Gonzalez-Foerster and composer Ari Benjamin Meyers have joined forces for a musical drama about endings, inspired by “Soylent Green,” the 1973 Charlton Heston science fiction thriller depicting a disturbing vision of New York City in 2022. The mixed-medium presentation will also feature Staten Island’s Richmond County Orchestra and photographs by Alex MacLean.

GUCCI GIRL: While the brand has a superstore just down the street, Gucci is making its mark on Bergdorf Goodman. The retailer has bowed a new Gucci accessories area on its main floor done in the Italian luxury house’s aesthetic — meaning brass fixtures and smoked glass galore. But one advantage of buying Gucci bags, eyewear, jewelry and gloves at Bergdorf’s is the exclusives. The store will offer 15 one-of-a-kind bags designed in its signature lilac shade. The Hysteria Jockey and Indy styles retail from $1,295 to $29,800 for an exotic skin version, and each has a silver hangtag that says “Gucci loves Bergdorf.”

HIGH NOTE: Self-admitted beauty junkie Mary J. Blige is scent obsessed, and pretty soon she’ll have her very own fragrance, which is being developed with Carol’s Daughter. At a private dinner at Philippe after her Radio City Music Hall performance Thursday night, Blige bit her tongue as she was about to reveal the details of the fragrance. “The name of the fragrance just came to me, but I can’t tell you,” said Blige. “I’ve always wanted to do a fragrance because I love when men and women smell good.” Although the company is still figuring out the details of the project, Carol’s Daughter founder Lisa Price said the fragrance is scheduled to come out at the end of next year. As one of the celebrity ambassadors for Carol’s Daughter, Blige does everything from appearing in the brand’s ads to making in-store appearances. Earlier in the evening, Blige performed for more than an hour in racy, over-the-knee stiletto boots. Blige shared the secret of keeping her energy level high. “That kind of routine, of course, requires training, but the key is to have four big meals throughout the day before going on stage,” she said. When asked if it’s true that she has a four-octave range and a killer baritone, Blige blushed and modestly responded: “I’m no Mariah Carey, but I do have to say I can do such a low baritone that it scares off men.”

MISS MOVES: Sigrid de l’Epine — long associated with Balenciaga — is switching luxury camps and heading to Chanel. The leggy, lethally chic de l’Epine will be in charge of public relations for Chanel couture, a new post reporting to Bruno Pavlovsky, president of Chanel’s fashion division. She starts this week. At Balenciaga, she had been responsible for public relations and patrimony.