In a roughly three-hour span after The New York Post’s Page Six item Monday night on a 10-person orgy Marc Jacobs reportedly hosted over the weekend, sourced from Grindr, the designer has posted on Instagram five times, four of which are a rebuttal of sorts to the Post, its Page Six item and a feature in the paper Sunday written by Maureen Callahan. The first of Jacobs’ Instagram activity was a seemingly light farewell to Grindr, the gay hook-up app, that said “Goodbye (for now) Grindr! It was fun for group get togethers, but, what really excites me now is my work!”

“Girl, I think I understand your pain. You’re a sick woman. It must be such a sad, unfulfilling and lonely existence to get paid for “writing” (I use the term loosely) an article put together from out of context information “written” by other journalists over a period of time, for different periodicals, in different countries. I can’t even imagine your suffering having made a life and name working for what has to be the world’s worst, trashiest, and most irresponsible of ‘newspapers’ (LOL)! I can imagine the powerful and fulfilling feeling you must feel with each piece you ‘write’ that helps yourself and your readers feel better about their lives by putting down others who are so fortunate as to have been blessed with a genuine passion for creation. Those creative individuals who like everyone else has feelings, a sexual appetite, ‘issues’, character defects, and professional ups and downs. If you were a real writer and not the parasite feeding off of the successes and failures of others I wouldn’t bother writing my thoughts here. I do feel sorry for you. Please know you are in my prayers. I hope you will someday find something, somewhere that gives you pleasure…and not at another’s expense. Should that moment happen for you, please don’t thank me. I only wish the best for everyone. Even you. Sincerely and disrespectfully, Marc (Jacobs).#lethimwhoiswithoutsincastthefirststone#youwannacomeforme?”

Finally, he followed up with a post about the Page Six item with a more humorous caption in regard to the guests at his “get-together” who told the Post the other attendees, “weren’t as good-looking as I expected.” Jacobs wrote, “I only wish you good health, happiness, and a long life to enjoy taking advantage of the kindness of strangers and talking [s–t] about others. #reallyqueen?” 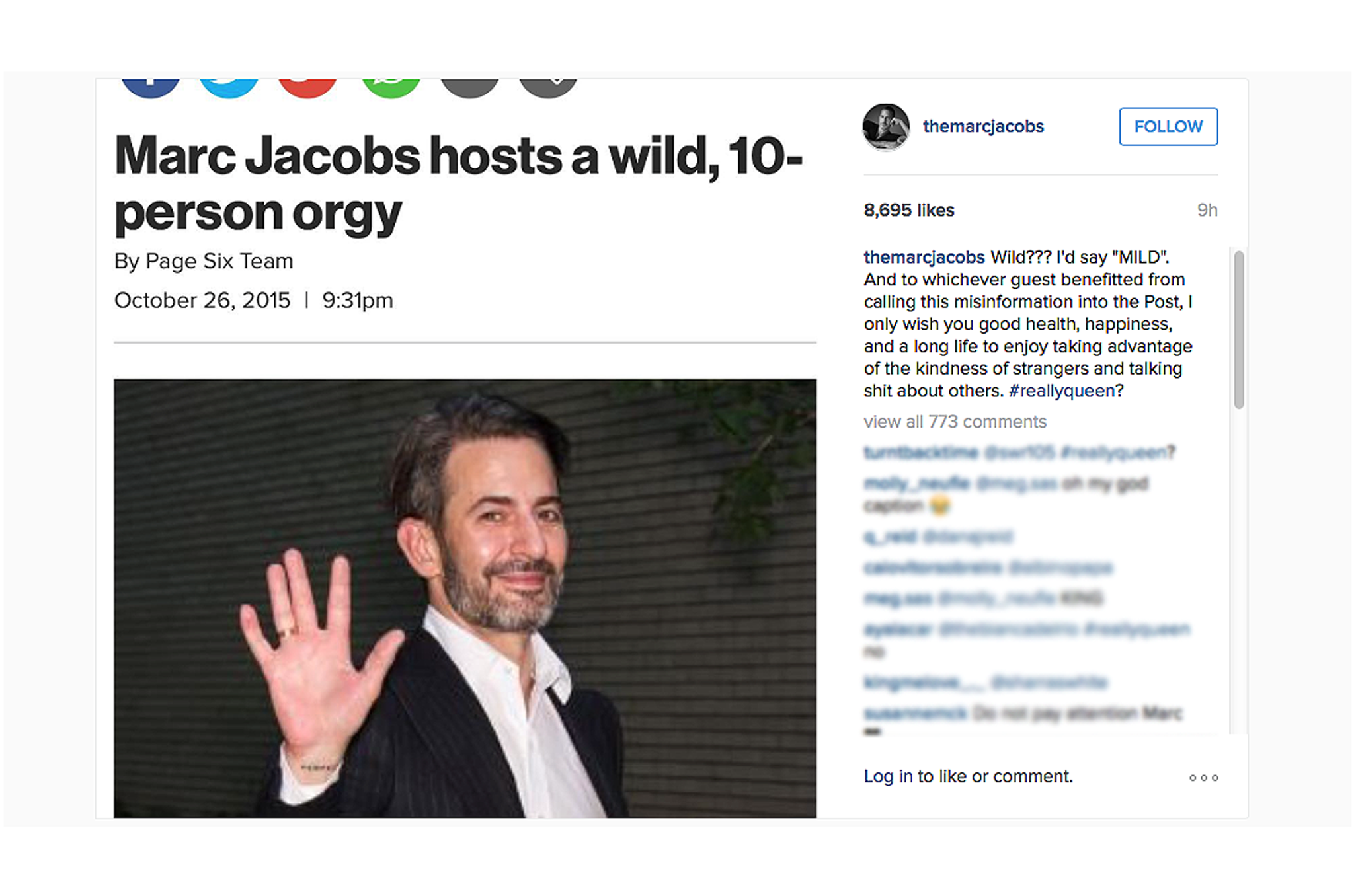