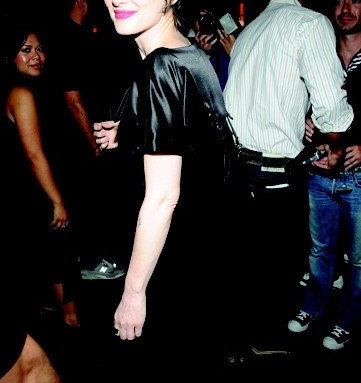 For the last two seasons, Marc Jacobs’ after-parties have been big bashes without any rhyme or reason to the guest list. But this time around, it was very clear who was in and who was out. Even if it was one of their best parties in years.

As guests navigated their way through the crush of people at the Greenwich Hotel, VIPs including Sofia Coppola and Kirsten Dunst made a beeline for the two long family style tables on the back patio. There, in full view of the rest of the party, they were served a full dinner by uniformed staff.

“This is bizarre, but I’m still going to stare,” said one member of the hoi polloi as she watched Jacobs and his friends being served their first course.

“This isn’t an elitist thing,'” insisted Robert Duffy, sitting next to Winona Ryder and across from Francine Prose. “If I had known they were going to do this, I wouldn’t have done it. But Marc and I haven’t eaten in 24 hours. I bet [the onlookers] have had breakfast, lunch and dinner.” Which only gave partygoers more energy to push and shove their way onto the patio once security tried to clear it out.

One woman, who had been seated at dinner, tried to make her way back out there after returning from the restroom, but security wouldn’t let her through. “But my purse is out there,” she cried.

“Get it tomorrow,” security barked. “You’re the only woman I know who goes to the restroom without her purse.”