Marcus Hyde is the latest male photographer to be called out for alleged inappropriate sexual behavior.

The photographer — who has worked with celebrities like Ariana Grande, Kim Kardashian West and Kanye West — has been bombarded with accusations from many female models over his alleged sexual behavior during photo shoots. Many have claimed that Hyde touched them inappropriately and pressured them into posing nude. The controversy escalated after model Sunnaya Nash posted one such alleged inappropriate interaction with Hyde on Instagram, which was later removed and then reinstated by Instagram itself. Fashion watchdog Diet Prada has been posting about the controversy, escalating it to viral status.

Many in the fashion and entertainment industries have spoken out against Hyde, most notably Grande and Kardashian West, who both posted on Instagram on the matter.

As more and more accusations surfaced, Instagram itself deactivated Hyde’s account on July 24 because he violated the social media platform’s sexual solicitation policies, according to a spokesperson.

From the multiple, explicit allegations to celebrity reactions, here is everything you need to know about the accusations against Marcus Hyde.

Who is Marcus Hyde?

Hyde is a Los Angeles-based photographer whose work frequently involves nude female models. He released a coffee-table book, called “Girls on Film,” that includes his work from many of these nude photo shoots. Hyde has also closely worked with Grande, Kardashian West, Kanye West and Kendall Jenner.

Last October, Hyde was involved in a near-fatal car crash while in Malibu after working on a shoot with Kardashian and West. The couple later gave Hyde $25,000 to cover his medical bills. The last time he was seen at a public event was at West’s Easter Sunday Service performance at the Coachella Valley Music and Arts Festival in April.

What are the allegations against Marcus Hyde?

When Nash inquired why she needed to send the nude photos in advance, Hyde responded: “gotta see if your [sic] worth it.” Nash called Hyde out on his inappropriate comments, to which he responded: “I’ll keep shooting celebs.” 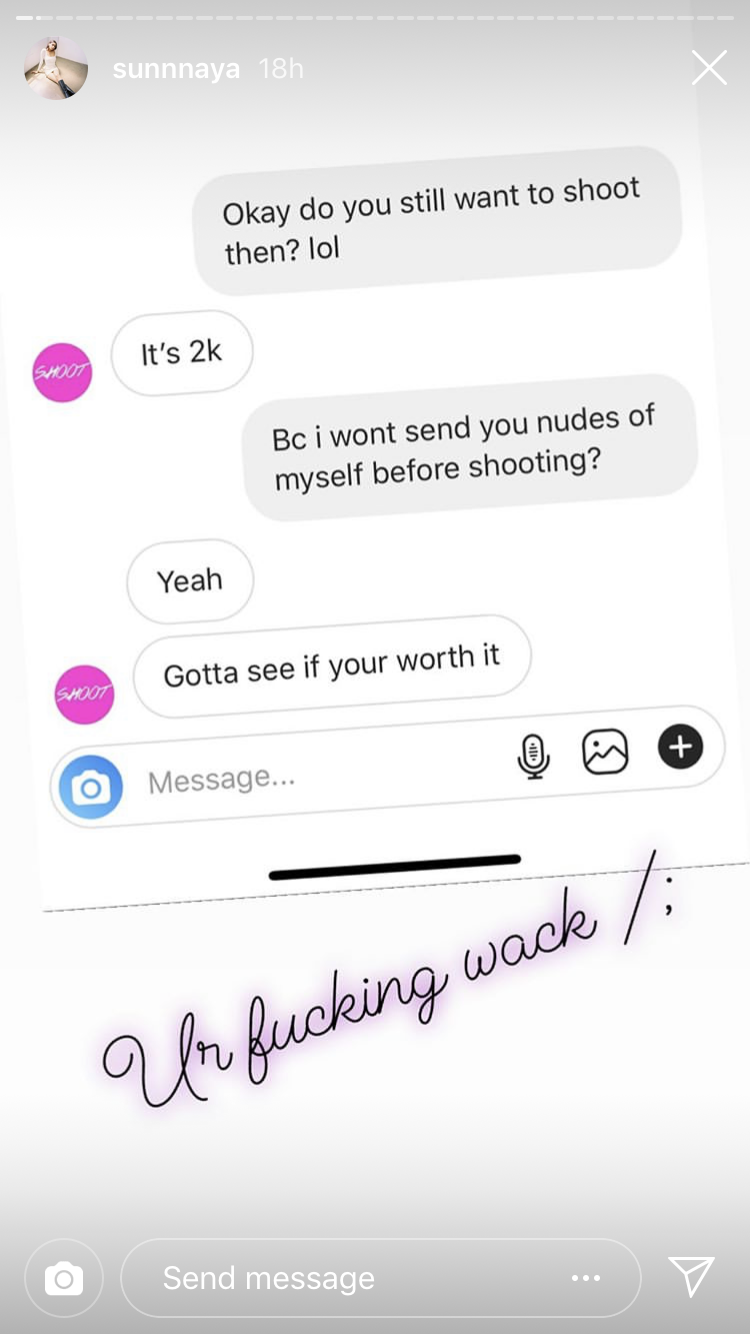 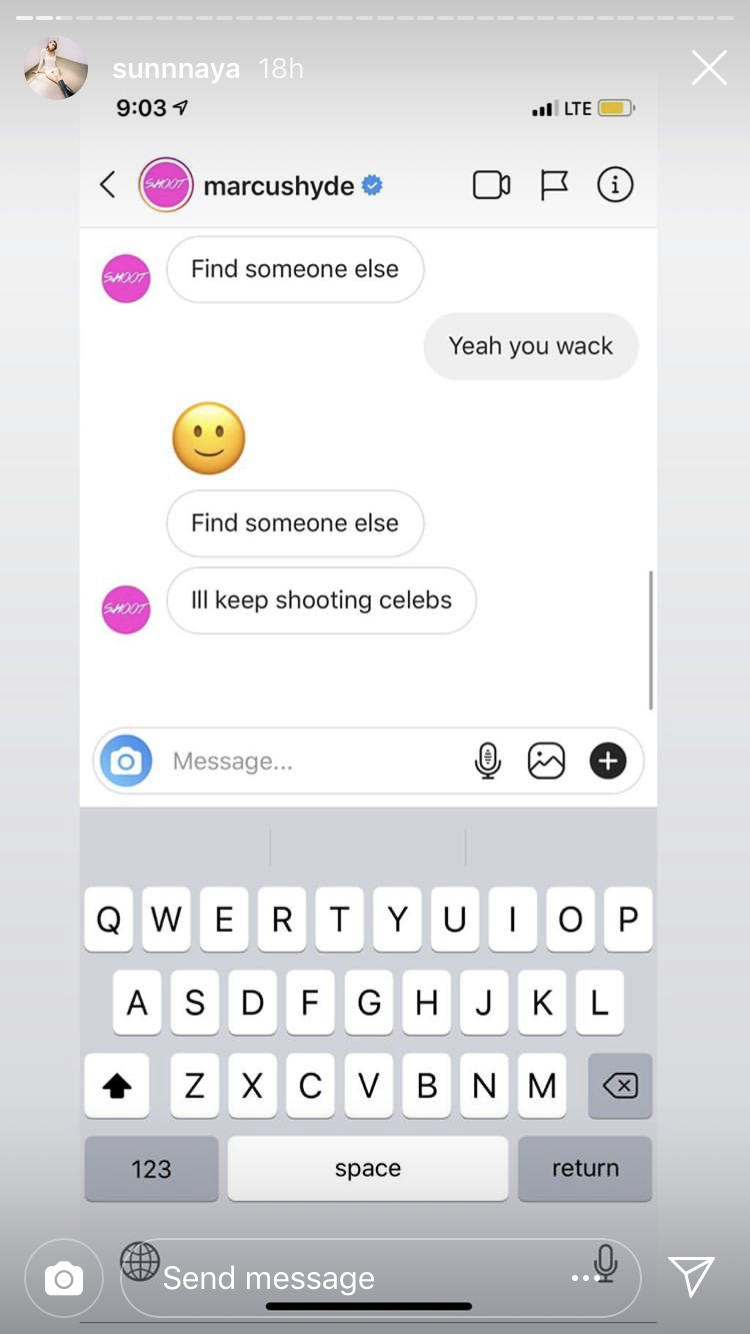 How did the Marcus Hyde controversy escalate?

After Nash posted the screenshots, other models began reaching out to her with their own stories about Hyde and his alleged inappropriate sexual behavior toward them at photo shoots. One model, whose name is blocked out in the screenshot posted by Nash, alleged that during a nude photo shoot Hyde touched her inappropriately. 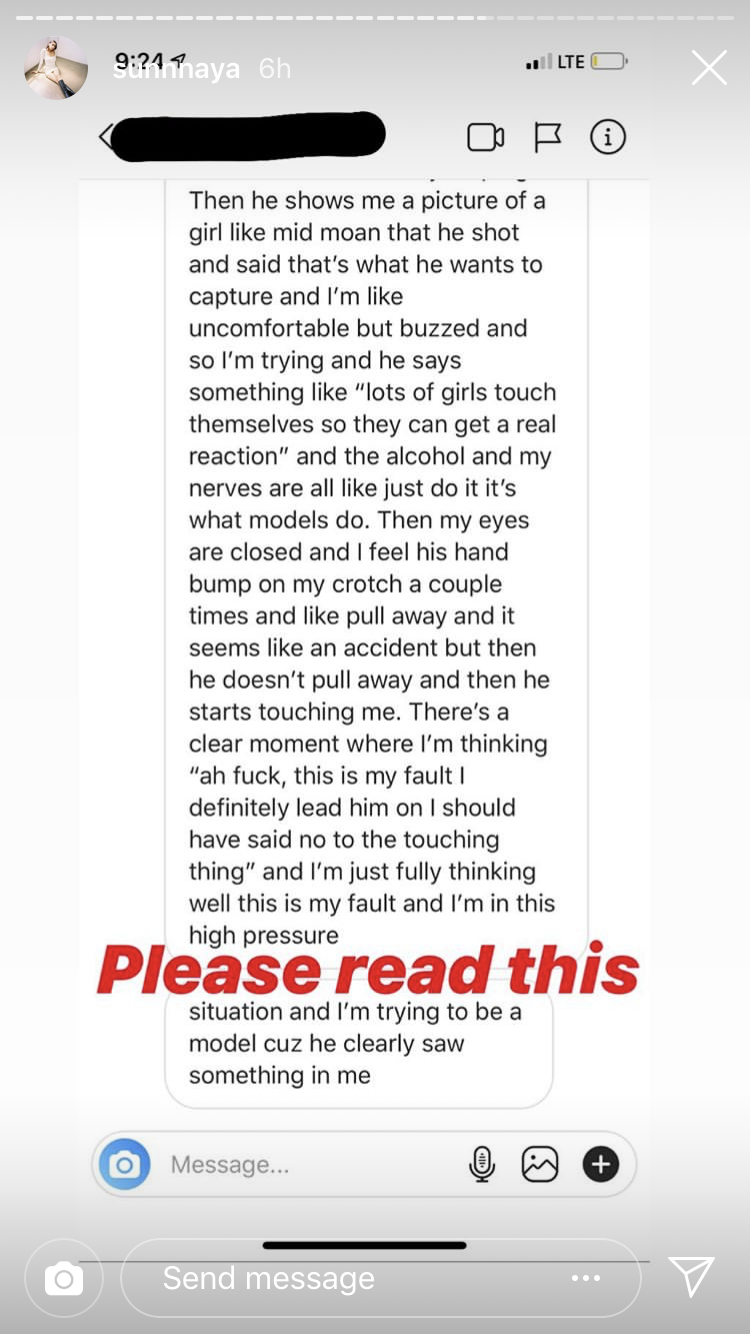 Another unnamed model sent her story to Nash, claiming that she was a young girl working with Hyde through a modeling agency when he allegedly forced her into a nude photo shoot. 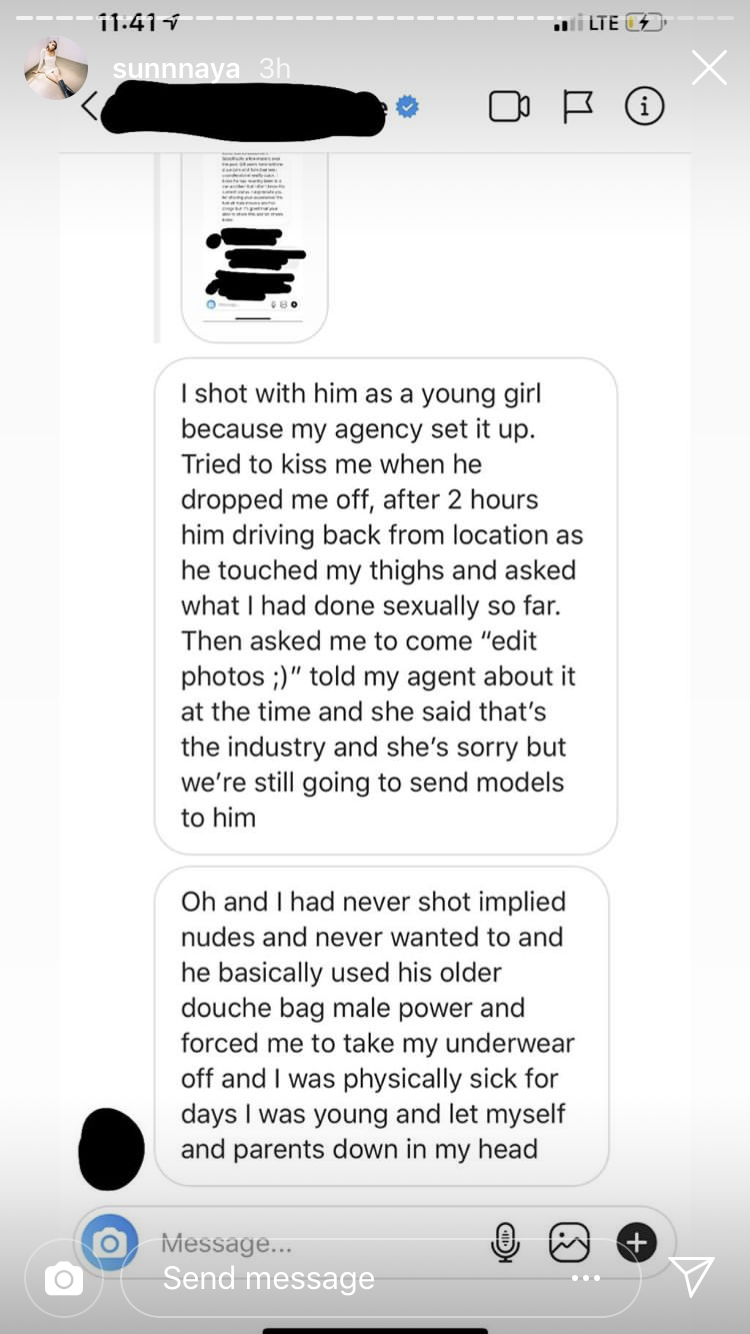 Has Marcus Hyde responded to the allegations?

Hyde has not responded to the allegations and his Instagram account has been deactivated by the social media platform. A spokesperson from Instagram confirmed that Hyde’s account was removed because it violated the company’s sexual solicitation policies.

Have any of his celebrity clients responded to the allegations?

Grande took to her Instagram Stories on July 22 to express her disappointment in Hyde and disgust at the situation. “Please do not shoot with photographers who make you uncomfortable or make you feel like you need to take your clothing off if you don’t want to,” she wrote. “If you want to, sick, but if you don’t please don’t. If they tell you you have to pay more money if you’re clothed that’s f–ked and I’m sorry that has happened to you. I promise there are so many respectful, nice, talented photographers out there.” 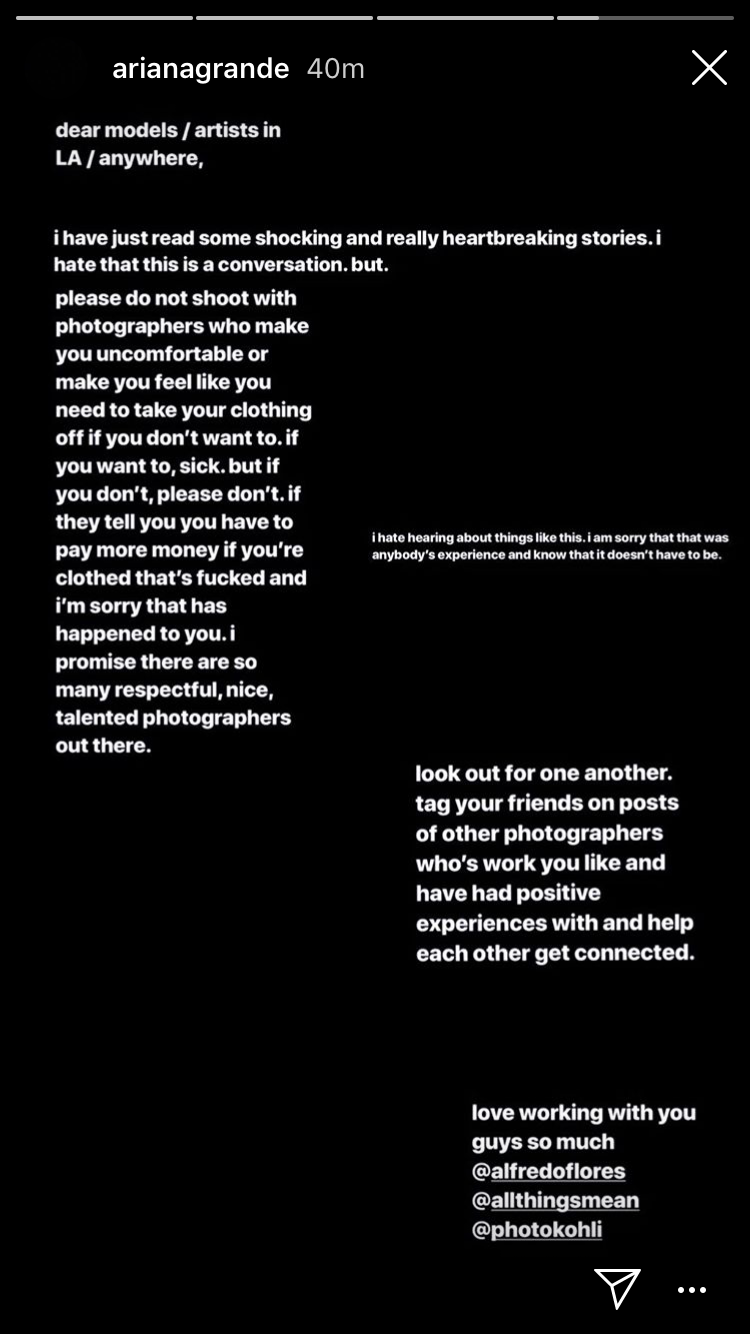 On July 23, Kardashian West responded to the accusations on her Instagram Stories, stating that she is shocked by Hyde’s behavior. “My own experiences have always been professional, and I am deeply shocked, saddened and disappointed to learn that other women have had very different experiences,” she wrote. “I stand in full support of every woman’s right to not be harassed, asked or pressured to do anything they are not comfortable with. We cannot allow this type of behavior to go unnoticed and I applaud those who speak out.” 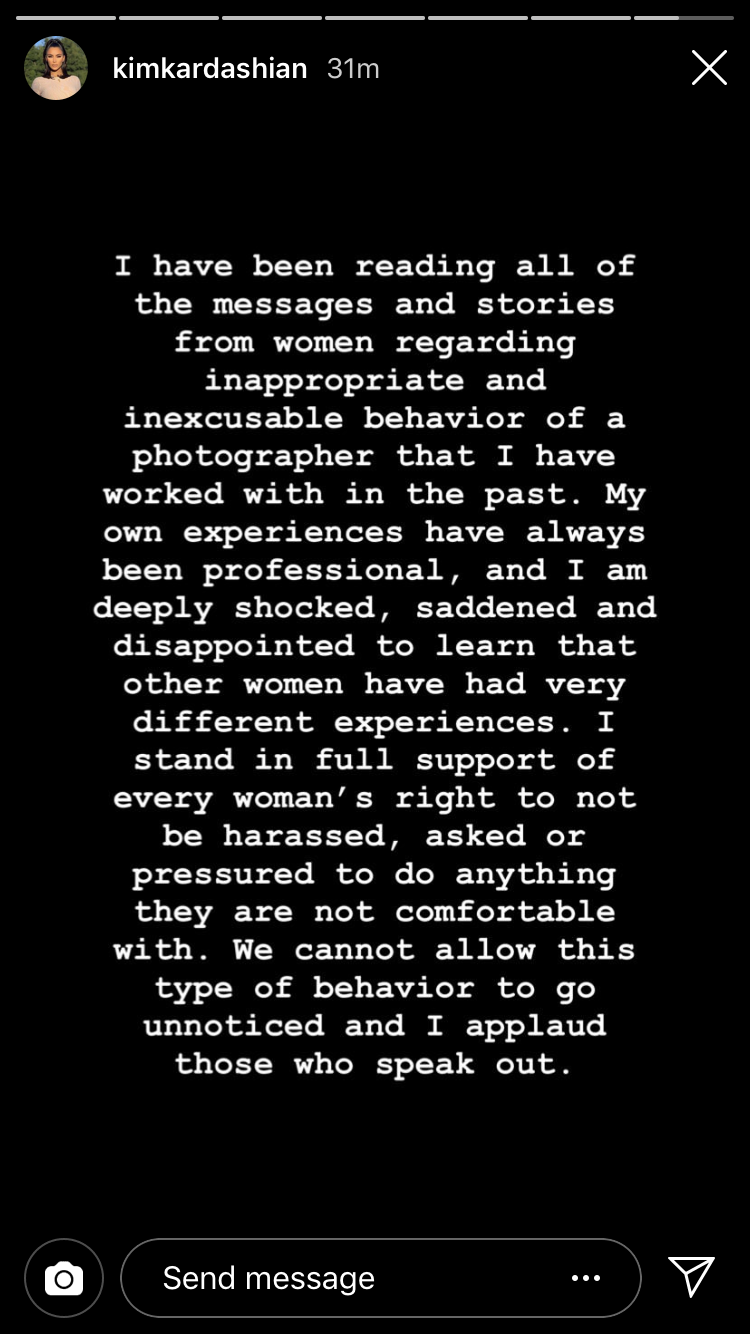 What are the latest developments?

Nash’s screenshots were removed by Instagram on July 22, with the social media platform sending her a message that her post was removed for bullying or harassment. Nash posted a screenshot of Instagram’s message with the caption: “Are you f–king kidding me @Instagram? #CancelMarcusHyde Stop supporting rapists.”

On July 23, Nash received another message from Instagram stating she may have her account deleted because her posts included nudity or sexual activity and bullying or harassment.

She has since posted her screenshots on her Twitter account, where she created a thread with all of the messages she received from victims.

Hi, I'm going to thread all the women who have messaged me with their stories about Marcus Hyde here. Most names are blocked for privacy.

On July 23, Instagram reinstated Nash’s original post, stating they made an error when they initially removed it.

Have any of Hyde’s friends reacted to the scandal?

Model Aisslynn Hotung — who was a passenger in the October car crash with Hyde — took to her Instagram Stories on July 22 to share her experience with the photographer. In a three-part screenshot from her Notes app, Hotung explains that she met Hyde at a photo shoot where he was overtly flirtatious; however, nothing transpired between the two. After awhile she agreed to do a nude photoshoot with him and ultimately ended up living with him. “I grew to like him because he was very sweet and humble, but I always had some reservations because it seemed like there was something more to him,” she wrote. “How persistent he was to shoot me naked and how demeaning he was when I didn’t want to shoot naked made me skeptical.”

She then described the car crash in which she experienced a concussion and other accident-related injuries and helped Hyde while he was experiencing a seizure. Hotung goes on to state that Hyde’s mother made her feel like that accident was her fault, which resulted in her feeling survivor’s guilt as he remained in the ICU.

After he recovered from the crash, Hyde went back to requesting nude photos from Hotung. He also didn’t acknowledge that she was injured in the crash and she felt hurt by his actions. “I don’t think he ever cared about me and we almost died together,” she wrote. “I can’t get over that.…I feel sick that I cared so much about him.…And now seeing all of this.”

The Biggest Influencer Controversies of 2019 — So Far

Ariana Grande Is the New Face of Givenchy