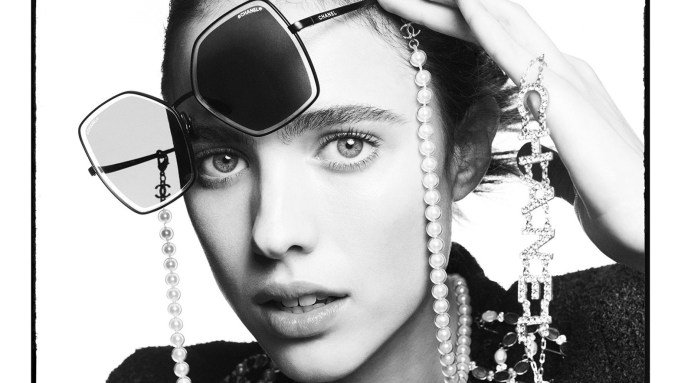 “Each pair of sunglasses highlights the originality of these inspiring muses,” Chanel said in a statement.

Qualley, who wore Chanel to the Golden Globes and the Screen Actors Guild Awards, is pictured peeking out from a butterfly frame in black metal, the attached eyeglass chain a string of white faux pearls.

Angèle, who performed at the party after the house’s Métiers d’Art show in Paris in December, peers out over oval transparent acetate frames attached to a necklace of gray beads. True to her media-shy persona, Adjani remains concealed behind oversize black sunglasses.

Williams, who codesigned a capsule collection with Chanel, also plays it mysterious with black sunglasses embellished with fine metal plaques engraved with a tweed-like motif. Tellier, who played live at Chanel’s spring 2014 couture show and created a summer playlist for the brand, sports rectangular shield glasses lined in tweed.

With a vast network of brand ambassadors and friends of the house, Chanel frequently reunites famous faces in its ad campaigns. In 2017, Williams became the first man to front a handbag campaign for the French house, starring in ads for the Gabrielle alongside Kristen Stewart, Cara Delevingne and Caroline de Maigret.