The Iron Lady's personal belongings sold for a total of 3.2 million pounds, or $4.8 million. 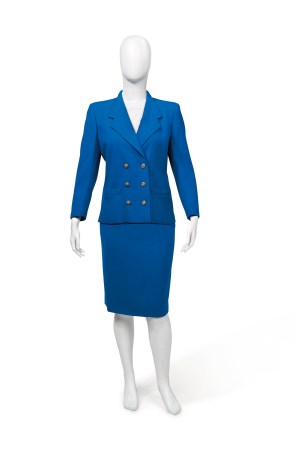 FASHION INFLATION: Margaret Thatcher may have been better known for her strict economic policies than her dress sense, but that didn’t stop bidders from paying over the odds for her personal fashion items, including suits, handbags and jewelry at a Christie’s auction in London this week.

Indeed, some pieces sold for more than 30 times the estimated price.

About 150 personal items owned by the late British prime minister and left to her daughter Carol went under the hammer on Tuesday, in an auction that drew bidders from around the world, including Australia, Oman, Malta and Korea.

During her tenure, Thatcher was the epitome of power dressing with her wardrobe of Aquascutum skirt suits and boxy handbags.

All of her handbags, including a navy blue Launer bag and a small Fendi with gold hardware, were sold well above their guide prices.

When the auction was unveiled, the British press made much noise about the fact that the Victoria & Albert Museum did not show interest in the pieces, and the press noted this week that no one from the V&A was present at the auction.

The auction raised 3.2 million pounds, or $4.8 million, while an additional online auction of a further 200 items continues on the Christie’s Web site.