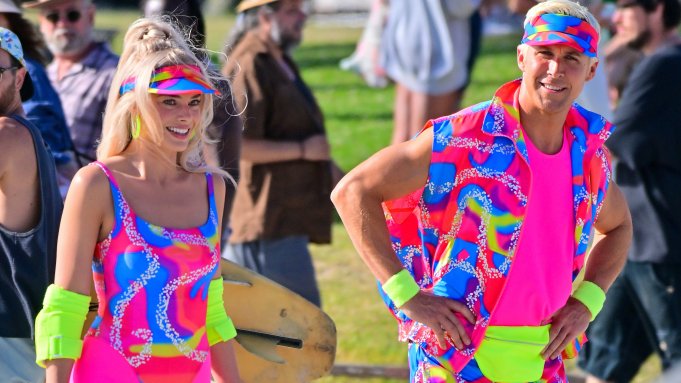 Barbie and Ken are back at it again.

On Monday, Margot Robbie and Ryan Gosling dressed in character once more for their upcoming “Barbie” movie, wearing matching neon pink and lime retro ensembles reminiscent of ‘90s workout gear. Both stars were also wearing rollerblades as they were seen filming in Venice Beach, Calif.

The outfits were a nod to a real life doll that was released in 1994 called “Hot Skatin’ Barbie,” which dressed Barbie in a similar outfit and accessorized with roller skates and ice skates, a helmet and hair brush.

Robbie has been tapped to play the titular character, while Gosling will star as her iconic boyfriend Ken.

This week, Will Ferrell was also seen rollerblading in a pink suit in Venice Beach. According to The Hollywood Reporter, the comedian and actor will play the chief executive officer of a toy company that may or may not be Mattel, Barbie’s parent company.

Over the last few weeks, both Gosling and Robbie have sent the internet swooning over their pictures on set together. Last week, the duo were seen in Western-inspired outfits on set, with Robbie wearing a hot pink vest and matching flared pants, both of which were adorned with glittering star designs. Gosling wore a black cowboy outfit with white fringe detailing, boots and hat.

Though very little is known about the film, it began production this year — and apparently features an abundance of pink.

Last week, Warner Bros. Studios, which is developing the film, uploaded a first look at Gosling dressed in character as Ken on their social media channels, sending social media users into a frenzy on Twitter.

In April, the production company revealed the first photo of Robbie in character, wearing an all-blue outfit in a bright pink retro convertible against a matching pink backdrop.

The movie is scheduled for release July 21, 2023, and will only be available to watch in theaters.