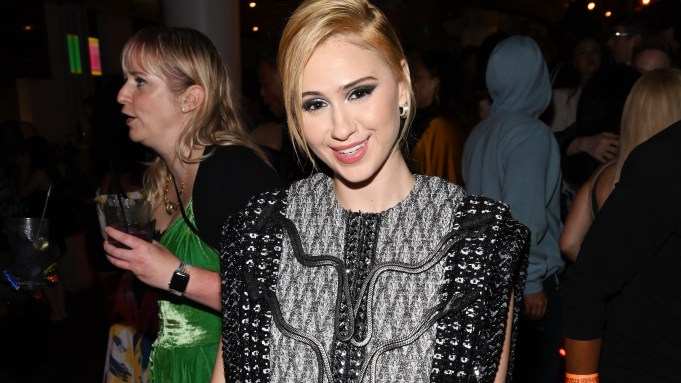 Maria Bakalova looked to Louis Vuitton for her appearance at Comic-Con.

The Bulgarian actress wore a black and silver structured top with sequin and metallic detailing and a matching black skirt from the label’s spring 2022 ready-to-wear collection paired with knee-high black leather boots at Comic-Con. She styled her hair up and wore a bold eyeshadow look with a nude lip.

She was styled by Jessica Paster, who also works with Emily Blunt, Aubrey Plaza and Miranda Kerr.

Bakalova, who skyrocketed to international recognition after starring in mockumentary “Borat Subsequent Moviefilm” in 2020, joined the cast of the “Guardians of the Galaxy” movie to discuss more about the upcoming third volume, which she is set to star in.

Other cast members present include Chris Pratt, Karen Gillan, Sean Gunn, Pom Klementieff and Will Poulter. Its director James Gunn also sat down with the cast.

“Guardians of the Galaxy Vol. 3” is scheduled for release on May 5 as phase five of the Marvel Cinematic Universe.

Bakalova has worked closely with Louis Vuitton in recent years, wearing its creations to events such as Cannes Film Festival and the Academy Awards and attending its runway shows frequently.