The tennis star also promoted her candy collection at Selfridges. 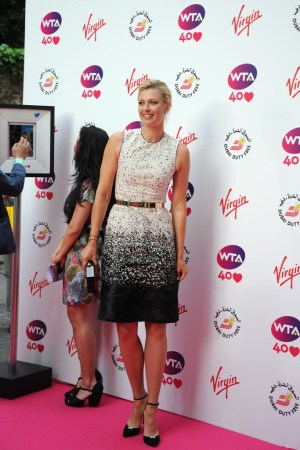 TENNIS TREATS: In London to compete in the Wimbledon Open, Maria Sharapova made an appearance at Selfridges, promoting the U.K. launch of her candy line Sugarpova before heading off to the Kensington Roof Gardens for the pre-Wimbledon party. “I’ve always had a sweet tooth, ever since I was young,” said Sharapova at the Selfridges launch on Thursday. “It was a treat after practice. I would always ask my mom for a lollipop. That was my reward as a young kid. Growing up in Russia, I loved my  tea and my little sweets.”

The collection of sweet treats, which includes 15 types of candy with unique names like Chic, Cheeky and Sassy, launched last August in New York.

Later that evening, dressed in a monochrome Burberry dress, Sharapova joined fellow tennis players Serena Williams, Laura Robson and Ana Ivanovic at the annual pre-Wimbledon soirée, sponsored by Dubai Duty Free and the Women’s Tennis Association, and co-hosted by Sir Richard Branson. “It’s kind of a get-together of everyone: players and staff and people that you know. I personally love London and I have a lot of friends here and we all hang out and have a great time,” said Sharapova.

Unexpectedly, Holland is an avid tennis fan. “I’m hoping to go with my dad. It’s something we do together,” enthused Holland. “I love watching tennis. It’s like the only sport I like watching. I’ll be rooting for [Andy Murray], always, because he is English.”