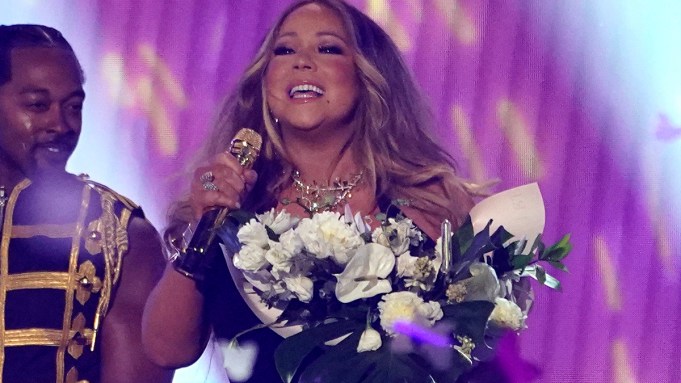 Mariah Carey guarantees a high note. The 53-year-old pop star made a surprise appearance at the 2022 BET Awards in Los Angeles on June 26, gracing the show with her signature style and iconic whistle notes.

The singer performed during the live telecast with 23-year-old rapper Latto, who is nominated for Best New Artist. During the surprise appearance, which came at the end of Latto’s Best New Artist performance, Carey emerged onstage behind a backlit screen, which showed the audience only her silhouette. After hitting one of her signature high notes, the star revealed her look, performing a portion of her hit song “Fantasy.”

Carey stepped out on the BET stage wearing a fitted black gown by Dolce & Gabbana with a thigh-high slit trimmed in gold. The floor-length gown featured a deep-V neckline with matching gold trim. The star wore the brand’s strappy gold platforms with the dress, crisscrossing the shoe’s metallic ties up her ankle.

Carey wore her blond locks down in her signature blown-out style with her makeup centered around a glossy lip and full lashes. She accessorized with a statement gold necklace and earrings by Pristine Jewelers and David Yurman bracelets.

Carey recently inducted into the Songwriters Hall of Fame on June 16, wearing a black Oscar de la Renta gown for the occasion. Accepting the honor on stage, Carey detailed how it’s been a hard-fought struggle to get people to take her seriously as a songwriter in the music industry.

To close out her speech at the event, Carey said, “Out of the 439 total inductees into the Songwriters Hall of Fame, only 32 have been women up until this moment. Now it’s 33.”

The BET Awards celebrate the achievements of musicians, actors, athletes and more throughout various entertainment fields. The first BET Awards took place in 2001 to celebrate Black culture and Black excellence. Taraji P. Henson is the host of this year’s show with performances by Lizzo, Latto and Jack Harlow. Leading nominations include Doja Cat with six nods, and Ari Lennox and Drake with four nods each.