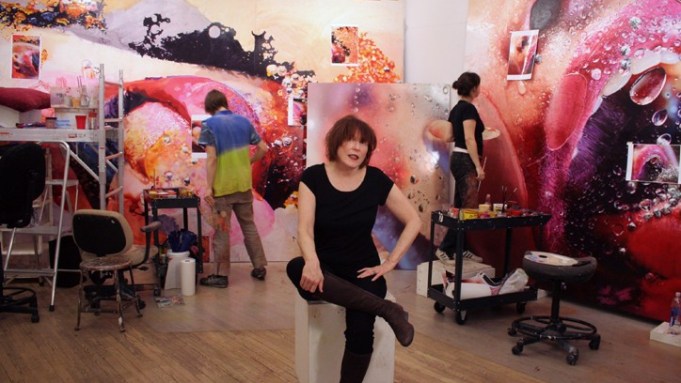 View ALL 11 Photos
MARILYN DOES MADONNA: Madonna fans heading to the latest leg of her Sticky & Sweet tour, which kicks back off in London on Saturday, are in for a surprise. The opening song, “Candyshop,” will be performed under a pair of giant luscious, pink lips licking and sucking on sparkly gold, orange, silver and green goo. The nine-minute video, titled “Green Pink Caviar,” is a new addition to the tour courtesy of artist Marilyn Minter, whose photographic work is in Madonna’s personal collection. “When I heard Madonna might be interested [in the video], I said, ‘Wow, how much does she want me to pay her?’” laughs Minter, who was initially told it was too late to insert anything into the tour. Apparently it was too good to resist and became part of the show.

“Then [Madonna] actually paid me a bunch of money and sent tickets,” said Minter, who is on her way to the U.K. for her first-ever Madonna concert to see her video in action.

Minter-watchers will recognize the short as a movie “trailer” that played at the Sunshine Cinemas and on a Times Square screen earlier this year. It will also feature on two large screens in Los Angeles when Minter’s next show opens at Regen Projects on Oct. 24.

IN THE POOL: Emporio Armani will sponsor the XIII FINA World Swimming Championships in Rome, set to take place July 17 to Aug. 2. The Italian team and members of the FINA committee will don a two-piece suit in navy blue jersey, with a two-button jacket featuring contrast white piping paired with trousers in a soft cut with a drawstring waist; a polo shirt in navy blue cotton piqué, and white sneakers in suede, with edges and logo embroidered in blue.

NICOLE’S NEXT MOVE: Nicole Richie isn’t letting her pregnant belly get in the way of building her fashion world — her pregnancy is the inspiration for a new capsule collection with A Pea in the Pod. After creating vintage-inspired rings, necklaces and headbands for her jewelry brand, House of Harlow 1960, the starlet is collaborating with A Pea in the Pod to produce maxidresses, tops and bottoms for expectant mothers. Available in stores from early August through late January, the collection has yet to be priced. What’s certain is that “it’s her Bohemian style,” said a spokeswoman for Destination Maternity Corp., the Philadelphia-based parent company of A Pea in the Pod. On Tuesday, Richie wrote on her Web site that she shot some images for the ad campaign last weekend with photographer James White.

TIME OUT NEW YORK: Carmen Marc Valvo will hit Times Square on Sept. 13, splashing video footage of his runway show on the NASDAQ and Reuters buildings as well as others. Last season, for the first time in his 20-year career, Valvo opted to show off-site at Citrine in Chelsea, and this time around he decided to rev things up by showing in a public space.

Thanks to NASDAQ, a sponsor of Valvo’s show, the designer will host a cocktail party for 300 in its Times Square building to debut the spring 2010 collection in what will be a pre-taped show. The World Gold Council is the presenting sponsor.

WEDDING PARTY: Since Jodi Della Femina’s latest book, “By Invitation Only,” is about a Hamptons wedding gone awry, it was only fitting that the author celebrated its release Monday night with a nuptial-themed fete. Betsey Johnson, Rachel Roy and Jamee Gregory were on hand for the party, which was cosponsored by Martha Stewart Weddings and held at Vera Wang’s Madison Avenue Bridal House. There, guests enjoyed wedding-themed touches like petit-fours, rosé Champagne and a trio of live music.