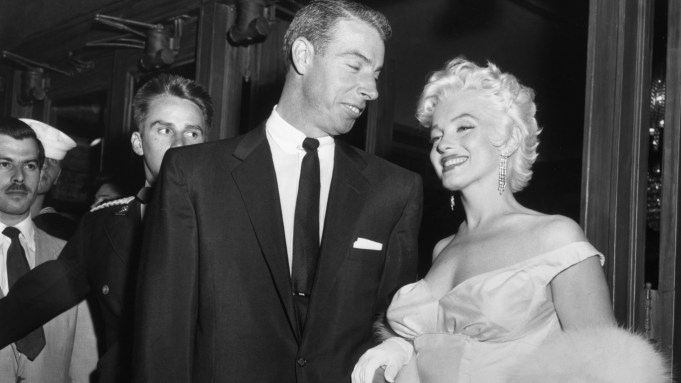 Marilyn Monroe and Joe DiMaggio may have had a short-lived union, but their relationship remains one of the most highly publicized in Hollywood.

With the anticipated arrival of Netflix’s “Blonde,” a fictionalized take on Monroe’s life, one of the key moments revisited in the movie is her relationship with DiMaggio, with whom she shared a tumultuous, brief marriage and, later, a friendship.

The two met in 1952 when DiMaggio, who had retired from professional baseball the previous year, asked an acquaintance to introduce him to Monroe, who, at the time, was still a rising star.

The actress was reportedly hesitant to meet with the New York Yankees legend, expressing her concerns he would be the stereotypical arrogant athlete, according to her autobiography called “My Story,” which was ghostwritten by Ben Hecht.

Afterward, the couple embarked on a long-distance relationship, with Monroe on the West Coast while DiMaggio stayed on the East. Though they tried to keep their romance private, it eventually became widely covered by the press.

In January 1954, the two tied the knot in San Francisco City Hall, where they were apparently mobbed by fans and paparazzi.

Since it was an elopement, Monroe did not wear a traditional wedding gown. Instead, she opted for a dark brown suit with a white fur collar and black pumps while DiMaggio wore a simple suit as they posed for pictures in front of the Saints Peter and Paul Church.

At the time, the couple could not have a church ceremony due to the fact that they had both been previously married and divorced. Their union marked both of their second marriages.

According to her autobiography, the couple shared similarities, including an interest in having children, despite the actress suffering from endometriosis.

However strong their connection was, the marriage was apparently doomed from the start due to DiMaggio’s jealousy and controlling attitude and Monroe’s frantic filming schedule.

During their honeymoon to Japan, Monroe was asked to travel to South Korea and perform for the American troops stationed there during the Korean War, which she did, leaving her husband displeased.

The relationship was further strained by his discomfort regarding her universal “bombshell” image.

Most notably, while the actress was filming for “The Seven Year Itch,” which includes her now-iconic “flying skirt” scene, fans and paparazzi were apparently also present and cheering her on, which was caused by the director Billy Wilder, who allegedly arranged for it. DiMaggio, who happened to be on set, was reportedly furious, causing the two to fight in public.

In October 1954, after returning back to Los Angeles after filming in New York City, Monroe filed for divorce from DiMaggio citing reasons of “mental cruelty,” according to the file. The two were only married for nine months.

In 1956, Monroe moved on and married famed playwright Arthur Miller. However, this union also ended, with the couple divorcing in 1961.

For the first half of 1961, Monroe underwent a number of surgeries, including one for her endometriosis, and spent four weeks hospitalized for depression at a psychiatric clinic in New York.

During this time, she and DiMaggio rekindled a friendship, with the former athlete securing her release and taking her to Florida where he was working for the Yankees at the time as a batting coach.

Despite remarriage rumors, the two maintained a good relationship as friends.

On Aug. 5, 1962, Monroe died from an overdose of barbiturates at her Los Angeles home. At the time, officials ruled her death as a probable suicide. She was 36.

For 20 years, he made sure to deliver half a dozen red roses to her crypt three times a week.

After her death, DiMaggio refused to discuss Monroe publicly and never married again.