Marni, as well as creative director Francesco Risso, apologized for the offense caused by a digital campaign shot by Brazilian photographer Edgard Azevedo.

Accused of racism over a digital campaign for flip-flops, Marni removed it from its social media accounts, posted a statement on Instagram and shared it with the press.

“The team at Marni is passionately committed to championing inclusivity and celebrating the beauty of diverse cultures throughout the world. As we endeavor to create a more equitable world, through fashion and shared humanity, we sincerely regret that our efforts caused further pain,” Marni stated. “We have immediately removed these images and we are redoubling our efforts to ensure our processes are carried out with thoughtfulness and intentionality through a strong equity lens. Our entire staff is committed to using this moment as an opportunity to leverage our platform to support and empower more voices and creators of color whose talent and insights are instrumental in creating a more inclusive and diverse fashion industry.”

The campaign, lensed by Brazilian photographer Edgar Azevedo in Brazil, featured Black models, one of whom appeared to be chained. He was actually posing on a bollard wrapped with chains, a Marni spokesman explained, while in another shot a model’s body is painted in clay.

Awkward captions fanned the controversy, as in the case of a photo of a white flip-flop embellished with colorful rhinestones layered over a close-up of the leg of a Black model that reads: “The adorned White Queen appeared compliant yet sculptural.” 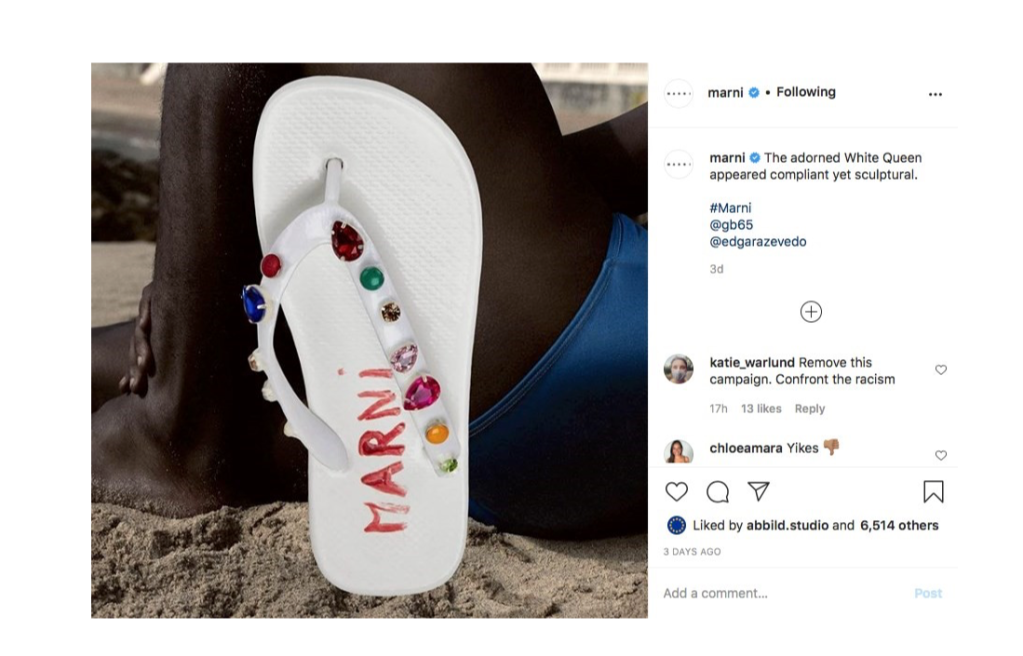 “I feel compelled to acknowledge the short circuit that has disappointed many of my fellow human beings over the past few days. I owe an apology to anyone who felt offended by Marni’s latest campaign. It was intended as a celebration of the latest summer collection, which pays an homage to Brazil and the tropicalia movement shot by native Brazilian Edgar Azevedo. Our aim was to capture the beauty of his community, but we failed to adequately do so in a matter that is thoughtful and respectful. The lack of clarity and the lack of attention to detail are intolerable,” wrote Risso, who is in a 12-year-long relationship with Black designer Lawrence Steele. “Though this moment has been painful, it has been a compelling and important moment for learning. I will do better. I humble ask grace from those who know me and patience from those who do not as I prove that celebrating diversity is at the center of my work and my creativity. Diversity and inclusion are imperative pillars of the fashion industry, and I am committed to keep fighting for it.”

Marni is the latest Italian luxury brand to be accused of racism and cultural appropriation in the past few years. In 2018, Prada faced accusations that animal-like figurines and charms in its stores and windows evoked blackface and the same happened in 2019 to Gucci with a balaclava-style sweater.