A new documentary short, "The Artist Is Absent," about Martin Margiela offers insights — but not an appearance by — the notoriously elusive Belgian designer.

By Kristi Garced
with contributions from Alessandra Turra
on April 27, 2015
View Slideshow 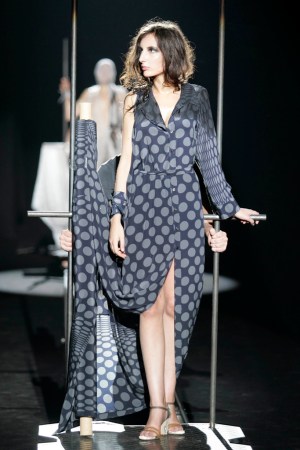 It should come as no surprise to anyone in the fashion industry that Martin Margiela is, indeed, physically absent from “The Artist Is Absent,” the documentary on his life which screened at the TriBeCa Film Festival on Thursday night, directed by Alison Chernick and produced by Yoox Group (its title an obvious play on Marina Abramović’s solo show, “The Artist is Present,” at the Museum of Modern Art in 2010.) What else would you expect from the notoriously low-profile Belgian designer who eschewed the spotlight — remaining backstage at his shows, eluding interviews and photographs — and ultimately preferred to let the clothes speak for themselves?

Still, via archival runway footage and interviews with a few of Margiela’s confidantes, whom he personally recommended Chernick reach out to — including Raf Simons, Jean Paul Gaultier, Olivier Saillard and Suzy Menkes, among others — the designer manages to come to life in the 10-minute short, which takes a look back at his career, from his early years at the Royal Academy of Fine Arts in Antwerp through his 2009 departure from the house that still bears his name. “He basically just gave me the thumbs up and that was good enough for me,” said Chernick of Margiela’s involvement. (John Galliano, the house’s current creative director, does not make an appearance in the film, either.)

It’s revealed in the beginning of the film that Margiela’s mother had a habit of buying vintage furniture and taking it apart, and it seems the designer picked up on her sense of deconstruction, which marked his avant-garde aesthetic. “[Martin] wasn’t the first to do deconstruction, but he somehow was the first person to make it believable… probably because I think his cutting is so exceptional,” Menkes says in the film. “The way that he cut clothes, the way that he shaped things to the body was very well done… Anybody can take a sheet and tear it up. But it doesn’t necessarily make a great garment.”

In the film, Gaultier reflects on his first impressions of Margiela, who apprenticed under him from 1985 to 1987. “I knew that he could do something great, but I didn’t imagine at what point it could be great,” Gaultier says. “I was not his teacher because he didn’t need any teacher.”

Patrick Scallon, who served as the house’s former director of communications for 16 years, explains in the film that it was during his time there — at Gaultier — that Margiela was able to witness the impact of designer fame firsthand. “As [Martin] saw his colleagues in the industry become increasingly mediatized, he saw that his anonymity was a real advantage to his day-to-day life,” Scallon says. “That he [didn’t] have that added pressure of people coming up to him — or having to feed that beast, as it were.”

Chernick had her own take on the designer’s mysterious persona: “The silence creates its own stories, which adds another dimension to the work.”

Margiela’s preference for anonymity also extended to his atypical cast of runway models, who always had their faces obscured on the runway in order to emphasize the clothes, not the wearer. “Never was he going to be able to compete by having Kate Moss or whoever [in his show],” Menkes says in the film. “He was presenting clothes without a model’s persona…He was against the idea of the glam model.”

The mystery surrounding Margiela the person continued until his exit from the label in 2009.