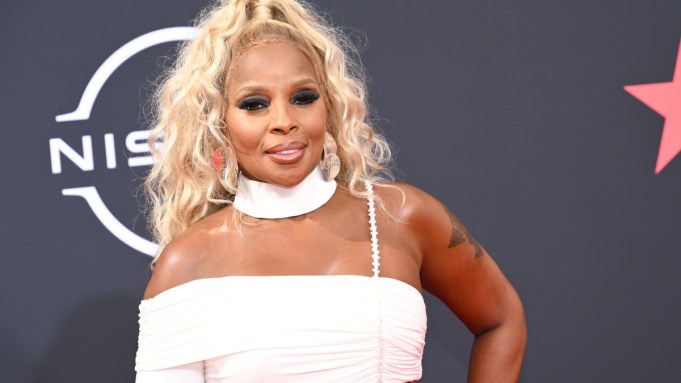 Mary J. Blige is a fashion chameleon, switching from street style to red carpet glamour, embracing plenty of style iterations in between along the way. For the 2022 BET Awards, the 51-year-old singer-actress donned a pristine-white two-piece outfit, creating a look that embodied the best elements of her signature style.

To attend the award show celebrating Black excellence and Black culture, Blige — who was styled by Jason Rembert — wore a look by Tony Ward. The design’s cropped off-the-shoulder top featured an asymmetric sleeve design with a singular long sleeve on one arm and a beaded strap on the other shoulder. The silhouette also wrapped around Blige’s neck, giving a choker-like effect. The hip-hop icon paired the top with a ruched high-waisted white skirt, which featured a slightly off-center thigh-high slit and a floor-sweeping train.

Blige paired the all-white look with silver metallic René Caovilla stiletto sandals featuring an ankle-climbing wrap strap made to look like a snake. Blige accessorized with several large diamond rings, a diamond cuff, and gold Cartier bracelets. She wore her wavy blond hair up in a half-pony, which showed off her large coin-like silver earrings. For makeup, Blige wore a dark black smoky eye, statement eyelashes, and a nude lip.

Blige is nominated for Best Actress for her role as Monet in “Power Book II: Ghost” on Starz and Best Female Artist. She is also nominated for the BET Her Award — an award honoring motivational and empowering songs that center women — for her song “Good Morning Gorgeous.”