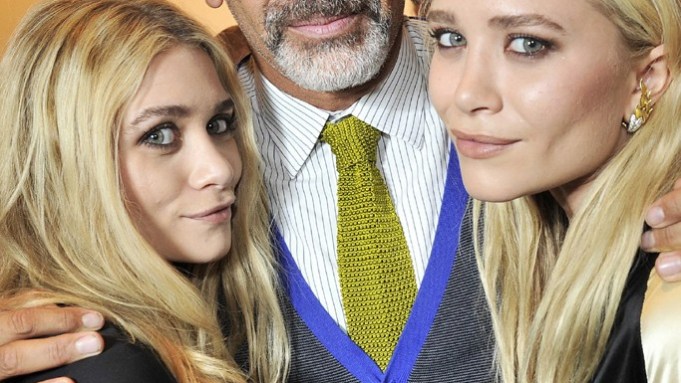 AIMING FOR THE TOP: Mary-Kate and Ashley Olsen feted the launch of their new handbag collection for The Row with a cocktail party at Paris multi-brand store Montaigne Market. Ashley Olsen said the label was rushing to keep up with demand for its much-publicized alligator backpack, which comes with an eye-watering $39,000 price tag. “It was the first thing that sold off the shelf,” she said, noting that extreme luxury tends to perform well during uncertain economic times. “During our last economic crisis in the U.S., the only thing that went up was Hermès,” Olsen remarked, before returning to sip Champagne with guests including Michelle Harper and Christian Louboutin. The shoe maestro could hardly be pried from the twins, but eventually bid them goodnight with a pinky shake. “I feel very much like a godfather to them,” he said. “I adore them both. They are very cute and very clever.” Mads Kornerup, founder and creative director of Shamballa Jewels, said he was working on a new collection inspired by a trip to Nepal. But ever since finding out that Karl Lagerfeld is a customer, Kornerup has been dreaming of working with the veteran designer. “I would love to, because my mother has always worn the Chanel ceramic watch, so I’ve been making bracelets for her to wear next to her watch, so I kind of feel like there’s a really nice little relationship right now,” he said with a laugh.