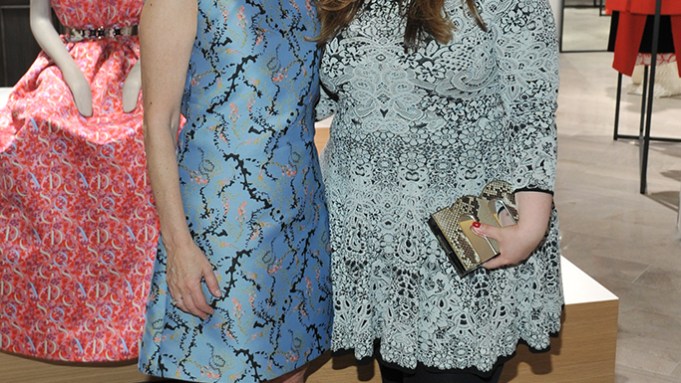 UP NORTH: For one brief tantalizing moment, the long black drapes cloaking The Room’s new location in the Hudson’s Bay Co.’s Toronto flagship parted Monday as 44 of the store’s customers paraded in for a private dinner held in advance of its reopening.

Ablaze with white light and pops of color from the racks hidden within, the path from The Room’s makeshift entrance into the dining space created for the evening was a tease for guests, among them “Cosmopolis” actress Sarah Gadon and Toronto philanthropist Suzanne Rogers, who were there to celebrate the night’s guest of honor, London-based Greek designer Mary Katrantzou, winner of the BFC/Vogue Designer Fashion Fund for 2015.

“My boyfriend said this was one show worth doing for such a good cause,” Katrantzou told the guests sitting in the tawny, peony-laden room, where Champagne and Sonoma wine flowed and the menu included sea bass, spring lamb and miniature pyramid cakes covered in hot pink fondant.

“This is a moment we’ve been anticipating for a long time,” said Liz Rodbell, the president of the Hudson’s Bay and Lord & Taylor, of the reopening of The Room.

Though she revealed no details about its new incarnation, those familiar with its history recognize that this is a game-changing moment for Hudson’s Bay. Dating back to the early Thirties, when the store operated under the name of Simpson’s, the St. Regis Room first opened in the Toronto flagship. By 1937, the latest Parisian designs landed in Canada via at The Room and it went on to showcase talents such as Yves Saint Laurent and Givenchy.