The couture shoemaker belonging to Chanel has collaborated with Laurence Dacade for an exclusive collection. 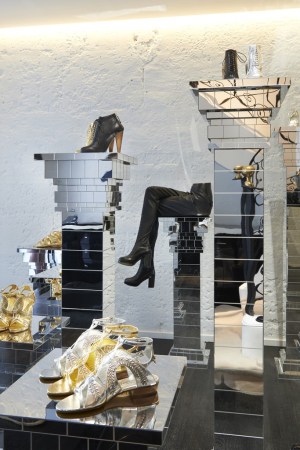 STEPPING UP: Massaro, which belongs to Chanel and is responsible for the couture house’s artsy footwear including its lace sneaker and pearl-studded half-boot, has set up a pop-up store at 19 Rue Cambon, a stone throw away from Chanel’s home base.

The boutique, to remain open through January 2015, stocks a limited edition collection designed by Maison Massaro’s master cobbler Philippe Atienza in tandem with Laurence Dacade, Chanel’s footwear director. Inspired by “a woman-child, a fairy tale heroine who dreams of a pair of princess slippers,” the line features lambskin pumps covered with black duck feathers and golden lace-up ankle-boots in distressed leather ornamented with a baroque heel honed from hammered gold.

Given the technical intricacy, some styles come with a waiting period of “a few days” as they require taking the client’s measurements, the house said.

Massaro was founded in 1894 at 2 Rue de la Paix in Paris, where it remains still today. Chanel snapped up the bespoke house, which counted Marlene Dietrich, Barbara Hutton and the Duchess of Windsor among its more prominent clients, in 2002 in a bid to preserve France’s couture savoir-faire.