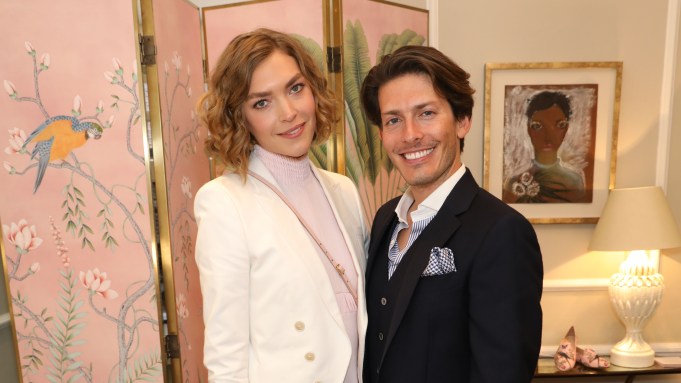 PRINTS PLEASE: “I’m obsessed with interiors,” said Edgardo Osorio, creative director and founder of Aquazzura, during a cocktail at the Matchesfashion.com townhouse in London’s Marylebone on Thursday evening.

He was referring to the whimsical, hand-painted wallpaper featuring tropical plants, trees, birds and animals by the interiors firm de Gournay. The paper was cast onto chic Shoji screen panels rather than the walls.

The event marked the collaboration between the retailer, de Gournay and the footwear brand on a shoe range. It was hosted by Matchesfashion.com co-founders Ruth and Tom Chapman, de Gournay director Rachel Cecil Gurney and Arizona Muse. Guests included Emilia Wickstead, Tania Fares and Jasmine Guinness.

The collection launched exclusively on the retailer’s web site with five styles: Loafers, slides, flats, pumps and mules — all of which were adorned in a pink tropical pattern.

“It was quite a complicated process, using a wallpaper and adapting it to shoes,” said Osorio. “It took us a very long time and was a long process, but the final effect was amazing. The print that I used from de Gournay was called the Amazonia. It’s a jungle print — but in pink.”

Osorio has decorated his home studio with pink, floral de Gournay wallpaper. “I loved the idea of doing a pink room. It’s actually very calming, and full of monkeys and parrots.”

Muse, for her part, was wearing embroidered open-toe mules adorned with pelicans, parrots and butterflies. “Each shoe has a different set of animals. Some are monkeys, some are toucans and the details are incredible. With the collaboration, the wallpaper is hand-painted and the shoes are embroidered,” she said.

Ruth Chapman said the response to the shoes has been “phenomenal. The fact that it’s de Gournay. We all dream about having a de Gournay room in our home.”

Tom Chapman said the current fiscal year has gotten off to a good start, with the business performing “very strongly” in the first quarter. “We’ve really continued the momentum from last year and year-on-year growth in Q1 has been impressive,” he said.

The retailer does not disclose quarterly financials. For the year ended Jan. 31, Matchesfashion.com posted record results, with total revenues up 61 percent year-on-year, and online sales climbing 73 per cent.