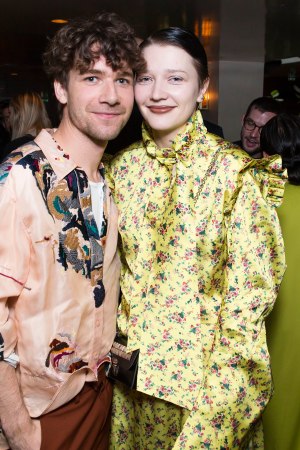 On Monday night, Tom and Ruth Chapman, who founded the British retailer, hosted an intimate dinner at Alcazar in Paris with Sies Marjan creative director Sander Lak to celebrate the occasion.

“This restaurant looks really nice; I love all this green around,” said Lak over drinks on the Alcazar’s mezzanine before dinner. Some 21 pieces available from the collection that Lak presented during New York Fashion Week in February will be available on Matchesfashion.

In addition, the collection’s distribution consists in 28 specialty and department stores worldwide. “This collection is really in America, Europe and Asia, so it’s a really nice divided kind of attention. [European stores] don’t carry that many American brands. They just don’t, because there’s so much in Europe already,” said Lak.

“Sander is part of this new wave of designers who understand very fashionable women,” said Natalie Kingham, buying director for Matchesfashion.com. “I fall in love each time I go to the showroom — the way he finds the right tones — yellows, pinks — and merges them and also his shapes. He’s a very talented designer.”

The 33-year-old designer was wearing an embroidered shirt from his women’s collection. “I don’t really think of male/female, not that I do unisex, not at all, but I just make clothes. I just present them on women but I wear them myself, too, and my friends, too,” he explained.

Lak’s friends at the event included stylist of the moment Lotta Volkova. “We met a couple of years ago when he was still working for Dries Van Noten. We teamed up about a year ago,” said Volkova who has just wrapped up the Vetements show on Sunday. “We had an incredible feedback. Apparently they had to block the streets downstairs from Galeries Lafayette because there were too many people trying to get in,” said Volkova.

“The show was quite extraordinary,” said Chapman about Vetements, which Matchesfashion has been carrying since its second second season.

The retailer plans to launch a French version in Spring 2017, Chapman revealed. “We are a business that has had one language for too long. It’s not about being translated. It’s about how you do localization, how you think about the French consumer and market. We want to start a second language in September next year — two languages a year is the journey. So many of the brands we work with are French brands and we need to have a courtesy to brands we work with and to the market. With the things that happened last week, it becomes more important that we, as a British company, we fight to stay part of Europe,” he said.