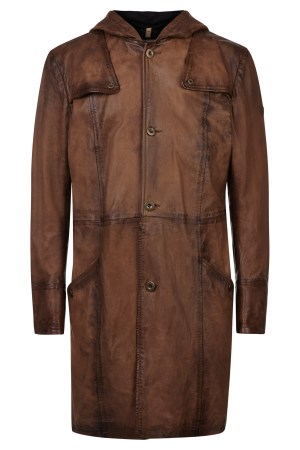 Matchless chief executive officer Michele Malenotti revamped looks from the prequel, the trilogy and the upcoming “Star Wars: The Force Awakens,” which opens on Dec. 17. He took inspiration from Darth Vader, Han Solo, Luke Skywalker, Obi-Wan Kenobi, Princess Leia and new characters, Rey and Finn, who are featured in the upcoming film. Highlights include a Princess Leia bomber jacket, a Skywalker blouson jacket and a Han Solo parka.

“I am a Star Wars fan,” Malenotti said. “Luke Skywalker was my hero. He’s my favorite character. He wants to challenge things. And with Matchless, we want to do the same thing. Matchless was closed for many years, and now we are reviving it. We’re reestablishing the company and the clothing part is a very important part of the deal, and we are designing a new motorcycle collection.”

Launched by Henry Collier in the Thirties, Matchless was a motorcycle manufacturing company that ceased production in 1966. The rights were purchased by former Belstaff owners, brothers Manuele and Michele Malenotti, who launched the clothing label Matchless London in 2012. The following year, the brand launched an outerwear range for men and women and enlisted Kate Moss to front the advertising campaign, photographed by Terry Richardson.

The 16-piece “Star Wars” capsule collection for men, women and children will be available for purchase on matchless.com and in Selfridges, Galeries Lafayette and Holt Renfrew. The price range is 400 pounds, or $609, for a nylon jacket to 1,500 pounds, or $2,285, for a napa jacket.

The label feted the launch of the line with a dinner at Sexy Fish restaurant in Mayfair with guests including David Gandy.