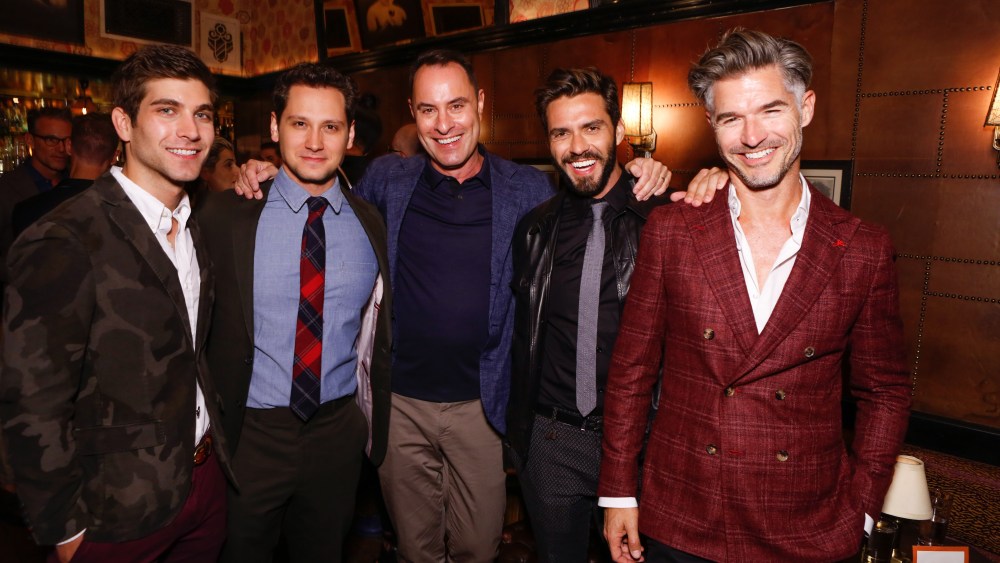 YOUNG TURKS: Some Millennials are so busy that they don’t have time to eat. That was the case with soccer player Robbie Rogers and actor Matt McGorry on Thursday night, when they dashed from To Boot New York’s dinner at Bar Marmont in West Hollywood before they could feast on caprese salad, crispy cauliflower, herb-roasted chicken and grilled skirt steak with shoe designer Adam Derrick, actor David Bernon, cycling entrepreneur Lorenzo Martone, and stylists Sophie Lopez and Michael Cioffoletti.

For Rogers, clad in a jean jacket embroidered with gold stars, his excuse was an early practice on Friday morning with the LA Galaxy.

McGorry — who’s been busy dancing in a mullet and mustache in Peking Duk’s new music video and producing his first movie, “Stealing Mona,” which he described as “a comedy about a bunch of idiots who are low-level thugs and they decide to steal the ‘Mona Lisa’” — rushed to the set of “How to Get Away with Murder.” Even during the cocktail hour, he tweeted to his 368,000 fans. Now that he stands on a platform built through his work on the hit ABC drama and Netflix’s “Orange Is the New Black,” McGorry is pushing for social change. Having been photographed in a T emblazoned with the word “feminist,” he also tries to bring attention to the Black Lives Matter movement by writing about it regularly on social media and wearing a rubber bracelet printed with the phrase. He is so devoted to promoting gender equality that he’s contemplating memorializing “feminist” as the third tattoo to complement his parents’ initials that are already inked on his shoulder blades. On the process to determine whether he should forge ahead with the body art, he said, “I’m going to print it and leave it out for a few months.”

In the meantime, while modeling for Brooks Brothers in an ad campaign running through December, McGorry is experimenting with fashion. The brand pushed him out of his comfort zone at the Oscars last February, outfitting him in one of its jacquard tuxedos. For To Boot New York’s soiree, he went preppy with a dark suit, denim shirt and red plaid tie that matched his pocket square. “I’m actually a jeans and T-shirt guy,” he said. “A new thing for me is eyeglasses.” Unlike the posers who, for aesthetic reasons, sport glasses that lack prescription lenses, he confesses to being nearly blind without them. The eyeglasses also help him spot the crucial difference between Los Angeles and New York, where he grew up in Chelsea. “In L.A., everybody is like: ‘Are those real glasses?’”