The men’s designer has created a separate campaign for his women’s wear, and will sell the collection in Paris. 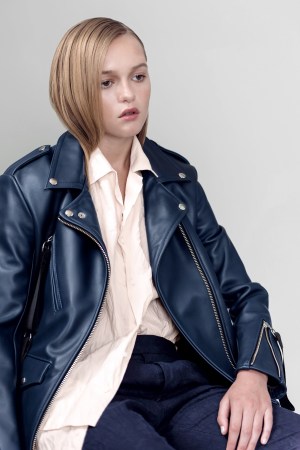 The designer shows a few women’s looks as part of the men’s collections he presents during London Collections: Men, but for spring, Miller has for the first time produced separate campaign images for his women’s collection, which he will sell at the British Fashion Council’s London showrooms in Paris at the Le Loft venue. The showrooms will run from Sept. 30 through Oct. 7.

Miller said the move came as stores were “chasing us for sales appointments,” for the women’s collection, and the designer noted that women are already buying into the collection.

The men’s and women’s designs have the same starting point, Miller said, with a focus on “innovative fabrication, masculine cuts and…form and texture.” His collections, he said, are always inspired by the idea of “the fundamental beauty that is found in chaos and destruction.”

The designer tapped photographer Joe Harper to shoot the campaign, which spotlights studio-shot images of model Maddy Elmer. Prices for the collection start at 90 pounds, or $138 for a T-shirt and rise to 1,500 pounds, or $2,295 for a leather jacket.