The hotel has tapped the London-based designer to revamp its courtyard garden, which launches later this week. 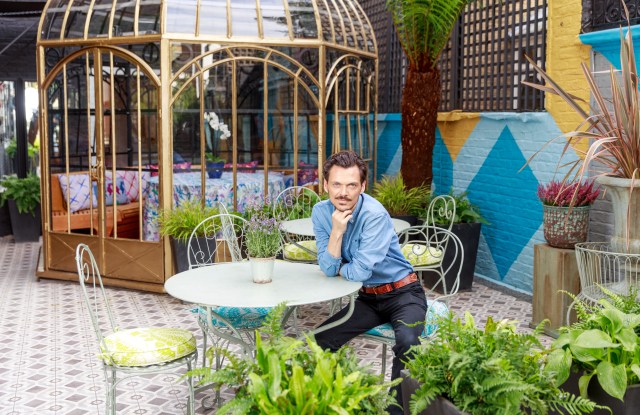 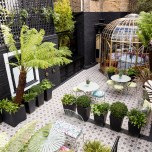 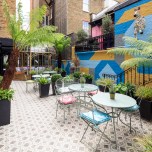 “It was a project that I’m particularly passionate about at the moment — interior design — so an easy one to say yes to,” Williamson told WWD. “It’s such a beautiful, iconic London hotel, so I was quite flattered in the first place that they wanted me to redesign their space. I loved every minute of it.”

Williamson, who said London’s unpredictable weather posed a challenge, worked around the tricky British climate and envisioned the space as “a secret, peaceful oasis that brings a smile to your face.”

The British designer has refurbished the 775-square-foot garden of the South Kensington hotel. Williamson worked with Harris Murray-Wicks Studio, landscape and garden design specialists, on the selection of tropical plants and added a range of lush, leafy plants including tree ferns from New Zealand and a mixture of grasses and hostas. He created a 16-foot flower wall covered with passion flowers and clematis evergreens. He has also taken a wooden screen and adorned it with foliage.

Williamson sourced the garden’s furnishings from Rockett St. George. They include pale, mint green steel tables, chairs and benches. He hung old Chinese plants on the wall, along with a faux zebra head, and used stone floor tiling in hues of gray, blue and meline yellow. Meanwhile, all cushions for the chairs, benches and tablecloths were from Williamson’s range with Osborne & Little.

Alongside fashion, Williamson has delved into lifestyle and interiors, and has been creating Osborne & Little wallpapers and fabrics, Duresta furniture, Museums & Galleries stationery and rugs with The Rug Company. Earlier this month, he launched his 20-piece Duresta furniture range at Liberty, where he held an intimate talk. Last week, he launched a new book, “Matthew Williamson: Fashion, Print & Colouring Book,” which explore his own career over the last two decades. Published by Laurence King, the 102-page paperback book features colorful behind-the-scenes photos, images, sketches and prints from the designer such as his dragonfly print.