The collection is stocked exclusively on Net-a-porter and the designer’s site. 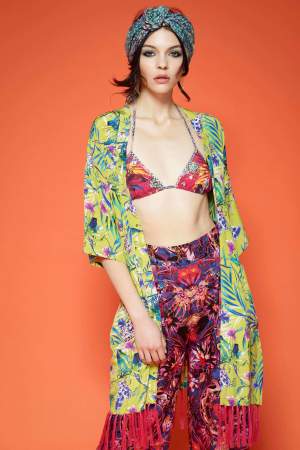 INTO THE WILD: Matthew Williamson has launched his first buy-now-wear-now collection. This line follows last year’s announcement that he would be stepping away from the London runway. The designer closed his Mayfair flagship and reorganized his business to focus on a direct-to-consumer model.

The Amazonia collection draws inspiration from the wildlife of the rain forest. Hand-painted psychedelic parrot, flower and snakeskin motifs were incorporated on silk maxi skirts, blouses and one-shoulder dresses. The slip dress has also been reintroduced, inspired by Williamson’s debut show, “Electric Angels,” in 1997. Accessories include printed silk scarves, crystal-embellished belts and sunglasses. Beachwear is another focus for the label and will be a permanent part of each collection. The current collection includes tasseled caftans, loose playsuits and swimwear in Williamson’s signature fluorescent prints.

The collection is sold on the label’s Web site, as well as on Net-a-porter. The luxury e-tailer is Williamson’s exclusive wholesale partner, following the reorganization of the business.

This collection is the first of six yearly drops. Each one will be named after its theme or inspiration to highlight its seasonless approach and the brand’s aim to address a global audience.

Williamson will be hosting regular trunk shows and one-on-one appointments with clients to promote the collection. In addition, he will be making a return to the London Fashion Week calendar in September to celebrate his 20th anniversary. Keeping in line with the brand’s new direct-to-consumer approach, the clothing will be available to purchase straight off the runway.

As reported, the designer has also launched a collection of branded stationary on his Web site this month.

In addition to Williamson, Burberry and Tom Ford have also announced plans to shift the focus of their runway shows to the consumer, last week.