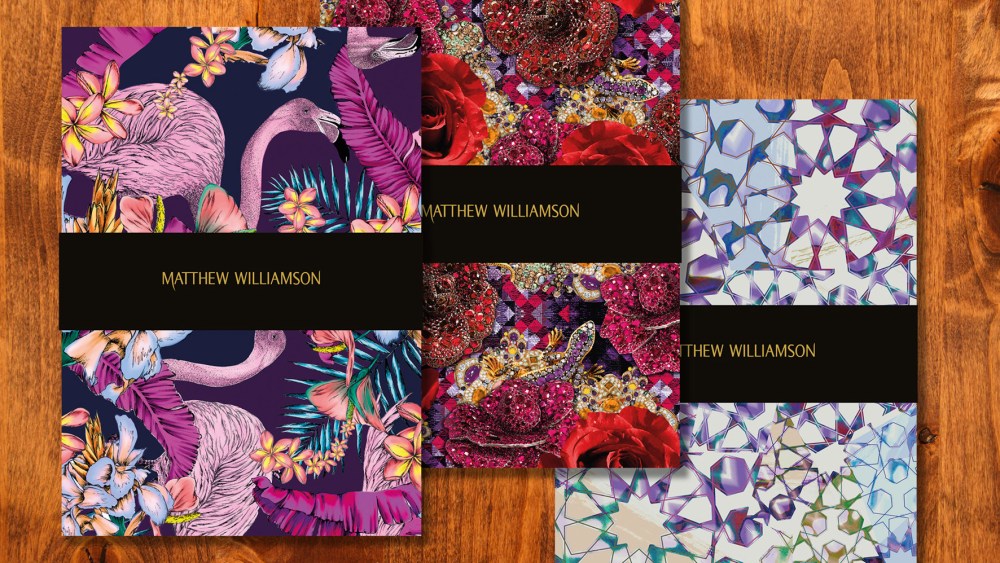 PRINTS WILLIAMSON: Matthew Williamson, who earlier this year reorganized his business to focus on a direct-to-consumer clothing and lifestyle concept, is set to release the first of his licensed products.

Williamson is leveraging his 20-year-old archive of bright, nature-inspired prints both for a collection of stationery and for a coloring book commissioned by Laurence King Publishing.

The branded cards and stationery will launch in February, under license with Museums & Galleries Ltd. The line is to include gift cards and packaging, as well as notebooks and journals. The range uses 17 prints from the designer’s archive of ready-to-wear collections, as well as a new print from the forthcoming spring 2016 collection.

It will be available to purchase from matthewwilliamson.com.

“In a digital age, I still love sending and receiving cards, hand-writing notes and wrapping gifts. We have amassed such a strong print archive over our 20-year history, and it’s therefore been such a pleasure to revisit some of my favorites,” Williamson said.

This coloring book, which comes out in September, will feature Williamson’s inspirations, catwalk archive and creative process with a series of hand-rendered prints for readers to embellish. The book will be published in September and coincide with the brand’s 20th anniversary.

Williamson called the book a “passion project,” and said he wanted to offer insight into how the prints were first inspired, the studio processes involved in creating them and how they were translated for the catwalk.

In addition to the new products, the designer has an existing portfolio of licenses, including wallpaper and furnishing fabrics with Osborne & Little, and sunglasses with Linda Farrow.

The print products are only the beginning for Williamson; 2016 will also see the launch of an activewear collection and a furniture line, too.

In February, the designer’s branded e-commerce site will relaunch, focused on the new lifestyle concept, while the first part of his spring 2016 rtw collection are to begin dropping in January.

Fresh installments will follow every two months, with the aim of creating six collections per year to be sold directly to the consumer.

People who want to try on clothes or engage with Williamson and his team are also able to make appointments at his studio and showroom in Queen’s Park London.

The designer is doing trunk shows, as well, and plans to sell via the soon-to-be relaunched site Style.com. In addition, the brand is working with Lyst.com and the online designer marketplace Orchard Mile.

As reported, Williamson reorganized his business earlier this year, stepped away from the London runway schedule and decided to present his collections on a buy-now, wear-now basis. He also shut his standalone stores and put his wholesale accounts on ice.