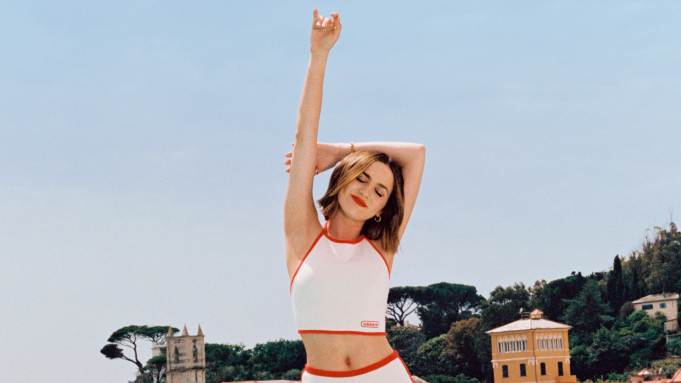 Maude Apatow is teaming with Asos and Adidas Originals for a new campaign.

The “Euphoria” actress was tapped by the online retailer for its latest Adidas Originals resort collection. Apatow fronts the campaign for the collection, which was photographed while the actress was on vacation in Europe.

The Asos x Adidas Originals resort collection offers 22 nautical-inspired pieces including polo shirts, cropped T-shirts, halter tops, leggings, shorts, sweaters, bucket hats and backpacks that feature the 1949 Adidas crest. Many of the styles are designed in a navy or red stripe print, which gives a nod to a nautical theme.

Apatow is seen in the campaign in various locations in Italy and France. In one image, she’s seen lounging on a beach chair reading the Asos magazine while wearing the collection’s cropped white T-shirt and red shorts. Another campaign image shows Apatow walking down a European street wearing an all-navy, sporty look.

This is Apatow’s first fashion partnership; however, the actress has been a front row fixture at fashion week since “Euphoria” debuted in 2019, including for designer brands like Thom Browne, Armani Privé, Saint Laurent and more.

“Euphoria” was Apatow’s breakout role. When the HBO show debuted, Apatow spoke with WWD on taking on the role of Lexi.

“We’re really similar. I’m more reserved and shy. I didn’t have a super crazy high school experience. I was kind of more shy and stayed inside,” she said. “[On the show] I’m sort of keeping everyone else afloat instead of having my own chaos. But then you’ll see later what happens.”

The Asos x Adidas Originals collection ranges in price from $35 to $65 and is available through the online retailer.