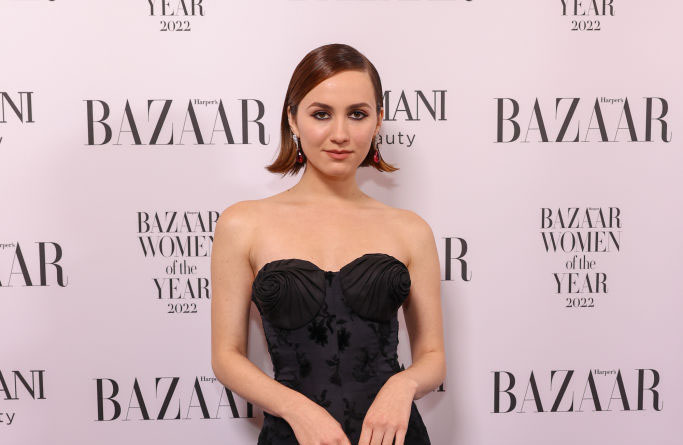 In honor of the ceremony, celebrating the achievements of women in entertainment, Apatow wore a strapless floral-print black dress that hit above her ankles from Schiaparelli’s spring 2023 collection.

She coordinated the dress with a pair of the brand’s fall 2022 couture collection shoes with the front designed to resemble golden toes.

The actress worked with stylist Mimi Cuttrell, who counts Gigi Hadid, Lili Reinhart and Madelyn Cline among her clients.

For makeup, Apatow tapped Naoko Scintu to create an evening-ready look using Armani Beauty that included a cat-eye liner, tinted eyeshadow and mascara. For hair, she worked with Dayaruci for a flicked-out bob parted to one side.

Apatow received the Breakthrough Award at the ceremony. Her role on the HBO series “Euphoria” has catapulted the actress into the spotlight, and she’s branching out beyond acting in front of the camera into developing screenwriting projects of her own.

The fashion industry has also embraced Apatow. In July, she starred in a new ad campaign for a collaboration between Asos and Adidas Originals for their resort collection campaign. During Paris Fashion Week, she was also front row for Loewe’s spring 2023 runway show.

The Harper’s Bazaar U.K. Women of the Year Awards honor women in film, television, art, culture and literature. Anya Taylor-Joy, Viola Davis, Maude Apatow and Little Simz were among the guests. Armani Beauty partnered with Harper’s Bazaar for the ceremony.