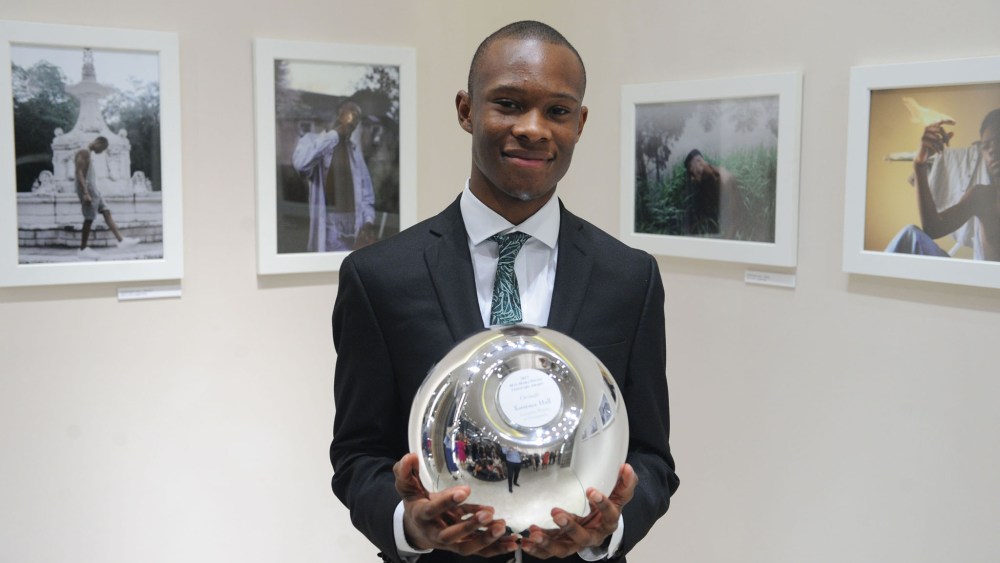 The budding photographer slung a Canon EOS Rebel T3i over his shoulder during the ceremony and reception for an exhibit of his works for sale at Max Mara’s store in the Miami Design District on April 12. The series of self-portraits depicts his coming of age as a cross between introspection and celebration. Themes touch on what defines manliness for his generation and suburbia as a place for a young artist to escape yet call home.

“I couldn’t believe how a 17-year-old could be so tormented,” said Maria Giulia Maramotti, Max Mara’s U.S. retail director, who purchased two photographs after presenting him with the $10,000 award. “You just don’t see work that powerful and meaningful outside of a major art gallery. It struck me right away, and I knew he was our winner.”

Hall competed with thousands of teenagers for the honor. Many are invited to Miami for National YoungArts Week in January, when they attend master classes by the nonprofit’s alumni and the Backyard Ball benefit sponsored by Max Mara for the third time in 2017.

During her speech, Maramotti noted Hall’s polish and sensitivity as keys to his work’s relevance. Following in the footsteps of last year’s winner, who attends The Juilliard School, he plans to matriculate at an elite art school in fall. Given his dapper style and eye for aesthetics, a fashion photography career may also be in the future.

“I researched Max Mara and saw Brazilian prints for spring,” said Hall, of his palm-printed bow tie from Topman. “Since they don’t make men’s clothes, I found the next best thing.”