A “Star Wars”-themed cocktail reception was thrown on Sunday night — the unofficial fan-appreciation day of the film and the night before the Met ball. 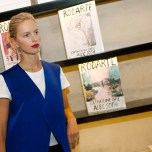 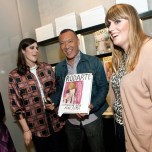 MAY THE FOURTH BE WITH YOU: “George Lucas doesn’t let anyone do anything ‘Star Wars,’ except Rodarte,” said Curve’s Nevena Borissova. “He just loves those girls.”

The pixie-sized boutique owner was flitting around her new Bond Street store in Manhattan, where a “Star Wars”-themed cocktail reception was being thrown on Sunday night — the unofficial fan-appreciation day of the film and the night before the Met ball — to toast Kate and Laura Mulleavy on their fall collection. Notables — Karolina Kurkova, Michelle Harper and Jenny Shimizu, Anya Ziourova, Irina Kravchenko, Keegan Singh, Ryan Korban and cohost Kirsten Dunst, who wasn’t doing interviews — dotted the space. The sisters were also on hand to sign limited-edition tomes, each hand-painted by their oft-collaborator Rebekah Miles.

“I made them a little planet,” Borissova continued, motioning over to the installation at the center of the room — mannequins sheathed in the fall collection standing in heaps of sand, sprinkled with gold glitter, like a trio of spectacularly dressed astronauts who’d just crash-landed on a strange planet. “We wanted something artsy fartsy,” Borissova said.

During a break from signing duties, Laura said the fete was a bit of a dress rehearsal for her. “It’s nice and mellow, but it’s good practice for tomorrow, for being around a lot of people,” she said, as a light-saber duel from the film was projecting on the wall behind her. “The Met, that situation, it can be a little daunting.”

The night before, Net-a-porter’s Alison Loehnis rolled out the welcome wagon for Christopher Kane with a dinner at the Waverly Inn. “I’m here till Wednesday, if I survive till then,” the designer cracked in his charming Scottish brogue. He was coming up for air after a barrage of air kisses from a gaggle of his New York-based fashion fans — Dree Hemingway, Alexa Chung, Vanessa Traina, Caroline Sieber, Carolyn Murphy and Harley Viera-Newton. “I have the Met, then a few things on Tuesday,” he said. “I’ll be slightly hung over, but it’s a good excuse.”