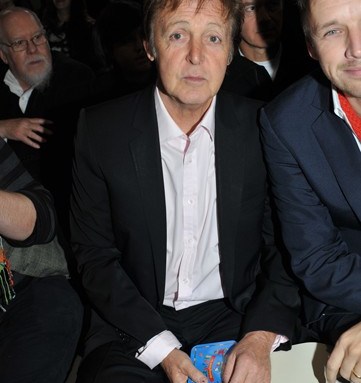 DEEPLY FELT: Sporting a fetching leather vest, Sacha Baron Cohen was dressed as his alter-ego Bruno, a gay Austrian fashion show presenter, and made his first Paris appearance at the Stella McCartney show Thursday – after stirring up a little backstage mayhem in Milan. This time, it seems the comedic actor was actually invited, and he hammed it up in his second row seat, showing wild approval for some looks, disdain for others. From her usual front-row perch, Twiggy said she’s looking forward to next week’s broadcast of her new TV show, “Twiggy’s Frock Exchange.” The first program features almost a hundred 16 to 83 year-olds swap dresses. “The older ones had all these things from the Fifties and Sixties, the young’uns were going berserk,” Twiggy said, adding that designers including Matthew Williamson and Christopher Bailey feature in the show. Twiggy has just wrapped M&S’s Christmas campaign alongside Brit pop comeback sensation, Take That. Actress Ludivine Sagnier, meanwhile braved the crowds despite being some six months pregnant. “Although I’m the target of a certain distortion,” she said, “I wanted to get up and see Stella’s show.” Guests cooed over a giant fuzzy felt circus design, by Dinos and Jake Chapman, which formed the playful backdrop to Stella’s show. “It’s the world’s biggest fuzzy felt picture _ I hope,” said Dinos, adding though he and Jake designed it, they passed on the hard part. “A lot of people were probably cursing us, all that cutting and sticking,” he said. Scottish singer and Texas frontwoman Sharleen Spiteri, meanwhile, tried to recruit Dinos for her next video. “You could make me a felt suit for my latest video with a great big head,” she joked. “She’s sent toys,” exclaimed Stephanie Seymour, as she spotted the fuzzy felts gifts left on the seats.  “I want the purple one, can I trade?” she asked. The former model is working as a consultant for Interview Magazine, owned by her husband Peter Brant. “It’s hard to get things done,” she said. “I’m here to make connections.”