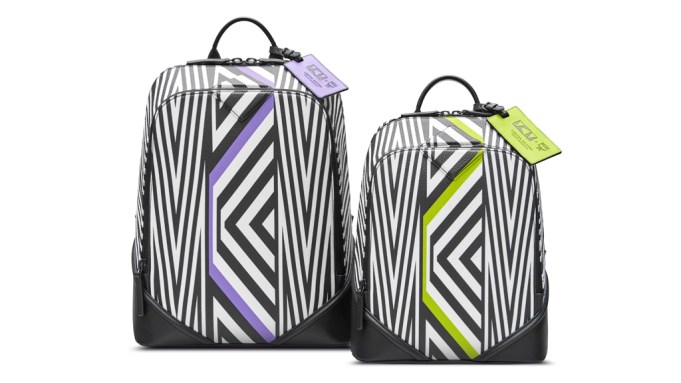 ARTY DUO: MCM has turned to Tobias Rehberger for a limited-edition capsule collection, slated to launch this month.

The German artist and 2009 laureate of Venice Biennale’s Golden Lion, has applied his graphic handwriting to a series of leather goods, including backpacks, shoppers, transformative clutches and cross-bodies, from the brand that celebrates its 40th anniversary this year.

Rehberger referred to the exclusive black-and-white print as “Dazzle camouflage,” a twisted take on the brand’s logo inspired by its heydays dating back to the Seventies and Eighties. “This collection is about the history of MCM, how MCM has created a strong brand ID by making patterns that only consisted of logo repetitions all over a bag. I played around with that idea and reinterpreted it with a redesigned logo rendered in stripes,” he said. But instead of repeating the logo as a pattern, Rehberger blew up only one logo and printed all over the bag resulting in a Pop, retro-tinged aesthetic.

Each of the styles is available in a limited series of 250 pieces.