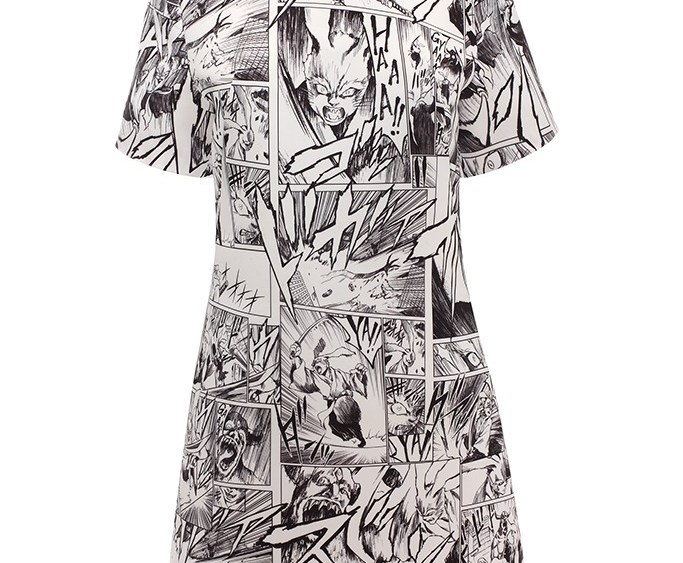 MCQ MEETS MANGA: McQ’s fall 2014 men’s wear and women’s wear collections, the latter of which hits stores next month, both spotlight the work of Japanese artist Yoshiyasu Tamura. Tamura’s manga comic strip-style images appear as patches of prints on pieces such as jeans, bomber jackets and leather pants, or as an all-over print on dresses and T-shirts. Andy Rogers, brand director at McQ, told WWD that the manga influence followed on from McQ’s sinister angry bunny character, whose image appeared on the label’s spring 2014 designs.

“The “Angry Bunny” collection was a big hit with customers and we wanted to carry it through into the new season,” said Rogers. “The McQ design team were inspired by Japan, everything from its artwork to its music scene and even its biker gangs, so we approached [Tamura] to ask him to create a manga design for us featuring the bunny.” Tamura added that the designs depict “a samurai bunny fighting with a ferocious monster on the streets of Tokyo.”

“Manga characters…are not omnipotent superheroes, so in my designs the McQ bunny is not invincible, but he is characterized by his strong displays of bravery,” said Tamura. Prices for the men’s and women’s collections run from 155 pounds, or $263 for a T-shirt through to 1,350 pounds or $2,292 for a leather biker jacket or pants stitched with patches featuring the manga design. While the men’s collection debuted in stores in early July, the women’s collection will bow in August, and McQ will launch a pop up shop and installation at Selfridges in London in September, based around the bunny character.